#TRAILERCHEST: It's here! Star Wars: Episode VIII - The Last Jedi trailer is here and it's amazing

Welcome to #TrailerChest, where we're taking a sneak peek at the brand new trailer for Star Wars: The Last Jedi.

That's right Star Wars fans, it's here and the Force is strong with this one. 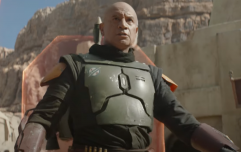 END_OF_DOCUMENT_TOKEN_TO_BE_REPLACED

After seeing Darth Vader absolutely annihilate the Rebel Alliance at the end of Rogue One, every Star Wars fan instantly turned their attention towards the next chapter in the world's most beloved saga.

The wait is over.

The Force Awakens absolutely smashed box-office records but we still have so many lingering questions. What happened at Luke's Jedi Academy? Who are Rey's parents? What's the background of Supreme Leader Snoke? Will Rey and Luke become best friends?

We need answers, but to quote Obi-Wan, "patience."

If The Force Awakens thematically mirrored A New Hope, does  this mean that the First Order will strike back in The Last Jedi?

Having taken her first steps into a larger world in Star Wars: The Force Awakens, Rey continues her epic journey with Finn, Poe and Luke Skywalker in the next chapter of the saga. This being said, the dark side of the Force is mobilising as Kylo Ren steps up his training with Supreme Leader Snoke.

popular
One of the best action movies of recent years is finally available to watch at home
The JOE Movie Quiz: Week 138
Jim Carrey's greatest performance is among the movies on TV tonight
QUIZ: Give this General Knowledge Quiz a whirl
The JOE Friday Pub Quiz: Week 278
QUIZ: Can you name every Batman actor in three minutes?
QUIZ: See if you can ace this General Knowledge Quiz
You may also like
4 months ago
Knights of the Old Republic remake – here's why you should be excited
8 months ago
Can you beat your mates in this Ultimate Star Wars quiz?
1 year ago
The Mandalorian – The Ultimate Season 1 Fan Quiz
1 year ago
The Hardest Star Wars Quiz You Will Ever Take
1 year ago
The spectacular trailer for The Mandalorian season two will blow you away
1 year ago
The JOE Movie Quiz: Week 61
Next Page