You're going to be watching this.

Just like real life, there's no such thing as a certainty in Hollywood but when Danny Boyle is attached to a project, you know that it's going to be good. Very good.

The Oscar-winning director has previously made 28 Days Later, 127 Hours, Slumdog Millionaire, Sunshine, Trainspotting and Steve Jobs, but his latest work seems like it harks back to one of his earliest - and most understated - films, the claustrophobic thriller, Shallow Grave. 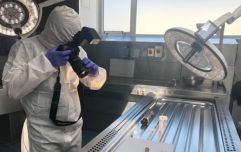 END_OF_DOCUMENT_TOKEN_TO_BE_REPLACED

Much like American Crime Story, Trust sees the Mancunian director adapting an infamous true crime story and in the first season, he'll be focusing on the kidnapping of John Paul Getty III.

According to the description, "the first instalment takes place in 1973, when the young Getty is kidnapped in Rome and his mafia captors are banking on a multi-million dollar ransom. After all, what rich family wouldn’t pay for the return of a loved one? ‘Trust’ charts the young man’s nightmare ordeal at the hands of kidnappers who cannot understand why nobody seems to want their captive back. The Italian police think it’s a prank and decline to investigate. Paul’s father is lost in a heroin daze in London and refuses to answer the phone. Paul’s grandfather — possibly the richest man in the world — is marooned in a Tudor mansion in the English countryside surrounded by five mistresses and a pet lion. He’s busy. Only Paul’s mother is left to negotiate with increasingly desperate kidnappers. Problem is, she’s broke.”

If that wasn't enough to get you excited then you'll be pleased to know that the first season will be written by Simon Beaufoy. He's the man responsible for writing The Full Monty, Blow Dry, Slumdog Millionaire and the upcoming Battle of the Sexes.

If you're a fan of shows like Fargo and The People v. O. J. Simpson: American Crime Story, Trust is for you.