Hurling has long been one of the most revered sports of the playing field, but Disney has given it a remake and it's terrifying.

The movie Descendants, made by Disney, is set in the magical kingdom of Auradon and the movie sees the offspring of evil villains brought to prep school with the royal children of the kingdom. 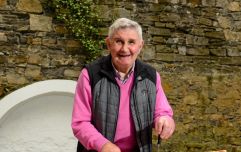 The country absolutely fell in love with Mick O'Dwyer during the documentary, Micko

END_OF_DOCUMENT_TOKEN_TO_BE_REPLACED

Among other activities at the school is this game which looks a lot like hurling but with a few changes.

For one thing there are Canons that fire at the players and the players are armed with American football helmets and pads as well as shields.

But the game centres around the hurling theme with everyone carrying standard hurleys and pucking around a leather ball.

It's a bizarre sport that would never work in real life, but at the same time it's a bit intriguing to watch.

Check out this crazy mash-up.

popular
The JOE Movie Quiz: Week 166
QUIZ: Test your skills to the limit with this General Knowledge Quiz
The JOE Friday Pub Quiz: Week 306
QUIZ: Can you score 12/15 in this difficult General Knowledge Quiz?
Family of Ashling Murphy share heartbreaking tribute at Fleadh Cheoil
Man in his mid-20s dies in two vehicle collision in Cork
One of the best Irish films of recent years is among the movies on TV tonight
You may also like
3 weeks ago
Looking for a hotel room for the All-Ireland Final weekends? It won't come cheap...
1 month ago
Taoiseach condemns "disturbing" fight at Galway v Armagh game
2 months ago
The 2 Johnnies share unbelievable catfish ordeal affecting over 40 people
2 months ago
Limerick hurler arrested following alleged altercation with Tipperary player in Limerick pub
3 months ago
Woman in her 20s dies after accident during Camogie match
9 months ago
Wicklow GAA to investigate fight after Under 15 match on Saturday
Next Page