VIDEO: Sylvester Stallone got the best reaction at the Golden Globes when his name was announced

A standing ovation for Sly, but he forgot two crucial names in his speech.

Sylvester Stallone picked up the Best Supporting Actor for Creed at the Golden Globes - his first ever Golden Globe win.

It was his first appearance at the prestigious awards show since 1977 and the announcement of his name inspired his esteemed peers to give the Rocky legend a standing ovation. 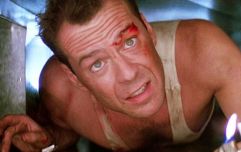 END_OF_DOCUMENT_TOKEN_TO_BE_REPLACED

Stallone's reaction to the terrific moment was brilliant, as was his speech.

Sly wasn't short of admirers who weren't in attendance, like his long-time adversary Arnold Schwarzenegger, who shared this fitting tribute on his Twitter page.

Congratulations @TheSlyStallone. You deserve it, my friend! #GoldenGlobes pic.twitter.com/Cl9IgjgQ7t

The congratulations even spread as far as the Premier League, with Everton, whose Goodison Park stadium was used for shooting, chiming in to share the good news.

Congratulations to @TheSlyStallone on his Golden Globe best supporting actor award for his performance in @creedmovie.

One standout element of Stallone's speech was his failure to mention his Creed co-star Michael B. Jordan or the director, Ryan Coogler.

We assume that he simply forgot amid the excitement and surprise of his victory, but it was definitely a noted omission.

The Big Reviewski || JOE · M. Night Shyamalan, Alex Wolff & Thomasin McKenzie talk about their new creepy thriller Old
popular
Dublin cinema named best cinema in all of UK and Ireland
Only Murders in the Building is a must-watch for fans of true crime podcasts
The 50 most iconic songs of all time* have been revealed
PICS: The man with the biggest penis in the world has one unbelievable problem with it
People think they've figured out the ranking of the viewers on your Instagram Stories
15 songs that are always used in sporting montages
Video: This disgusting video of zit-popping is so bad we can’t even look away
You may also like
2 days ago
The 10 must-watch new (and old) arrivals on Disney+ this August
2 days ago
The full list of all the new shows and movies coming to Netflix in August
3 days ago
The JOE Movie Quiz: Week 112
5 days ago
Two great new airplane-set thrillers to enjoy at home this weekend
5 days ago
Six big movies arriving in 2021 that we haven't got trailers for yet
5 days ago
These are the ten most-watched Netflix original movies of all time
Next Page