Viewers loved the return of The Young Offenders, with one gag leaving people in stitches

There are certain things that we come to expect from The Young Offenders.

Bad haircuts, those tracksuits, Mairead calling the two lads a pair of dickheads, Billy Murphy being off the wall, Conor and Jock stealing bikes and Cork's most lovable langers having absolutely no idea what they're getting up to.

Well, we got all that and more in the first 10 minutes of the Season 2 opener.

Aside from all of that, it wouldn't be the The Young Offenders without a bit of awkward nudity and that final scene definitely left a lasting impression.

After Jock forgot that he was supposed to be at the hospital for Siobhan's baby scan, the guys had to do a mad scramble through Cork to get there on time. It goes without saying that Principal Barry Walsh and Mairead were none too pleased about their absence.

Well, Barry was always going to hate Jock now that he's expecting a child with his teenage daughter.

Cue the most egg-citing challenge that Conor and Jock have ever faced. If Jock can take care off an egg - we loved the name Jock Junior - without breaking it for a month, Barry Walsh would give him his blessing to raise the baby.

This wasn't even the biggest problem for poor Barry Walsh because the final scene where Conor and Linda looked like they were about to have sex for the first time gave him a heart attack, but it left viewers in stitches.

Even before that moment arrived, we couldn't get over Jock's sage advice to Conor about foreplay, or should we call it 'the four plays?' 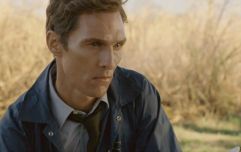 END_OF_DOCUMENT_TOKEN_TO_BE_REPLACED

Well, let's just say that the season premiere definitely made an impression on those watching, especially the final scene in Principal Walsh's office...

All in all, Season 2 has made an extremely strong start.

We can't wait to see what's in store for the next five episodes and these people agree.

Series 2 of #TheYoungOffenders doesn’t let up on the chaotic, surreal, hilarious and the unbelievably sweet.

Cement it up there with Father Ted and Derry Girls in the league of beloved Irish TV shows. It’s going nowhere.@YoungOffenders_ pic.twitter.com/EiRF0xRJ2m

#theyoungoffenders Welcome back Conor & Jock 🙌🙌 @RTE2 @YoungOffenders_ Broke me shite laughin & had a few lumps in me throat too. Brilliant start to Season 2

As for that final sequence, we're never going to be able to forget Linda stating that she'd "be happy to do it with half a boner".

Ah, The Young Offenders, how we missed you.

Anyone else still pissing their hole laughing at the "I can make do with half a boner" line from #YoungOffenders tonight?