WATCH: BBC release full scene from Peaky Blinders ahead of return of new season this weekend

If you're not already excited, then you will be after watching this.

The BBC have a released an entire scene from the new season of Peaky Blinders ahead of the show's return on Sunday and it looks tense as hell.

In the scene, we see Tommy Shelby approach a cross in a field, accompanied by some haunting music. Pinned on the cross is a scarecrow dressed in a manner similar to the Shelbys, with a letter addressed to 'Tommy Shelby OBE' in the jacket pocket.

There is only one sentence said in the scene, but that doesn't mean it doesn't tell a very dark story.

But we won't go into too much detail about the scene. Just take a look for yourself:

This whole scene is TENSE.

Here's a sneak peek of the new series of #PeakyBlinders. pic.twitter.com/ocA7oIMuTQ

Murphy himself recently told JOE that Tommy Shelby is still haunted by his traumatic experiences in the war, and that he's suffering from quite a lot of PTSD this season. 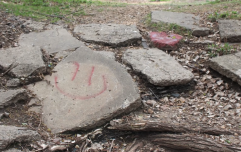 END_OF_DOCUMENT_TOKEN_TO_BE_REPLACED

“I think that this year feels to me like a little more about the inside of Tommy’s head," he said.

"Last season was very much about external forces - the guise of the Mafia - and it was pretty conventional in terms of what he was dealing with. Of course, there was his own psyche and mental fragility to deal with, that’s always apparent with Tommy, but in this season, it seems to me that it’s more explicit. It’s more about Tommy wrestling with his own head and that’s fantastic to play, obviously."

Add that to the fact that show creator Steven Knight said that he believes that Season 5 is the darkest season yet, and we have a decent idea of what we're in for.

Season 5 of Peaky Blinders premieres on BBC One this Sunday, 25 August.


popular
Sky's new true crime documentary series examines a very sinister murder theory
Gardaí warn of phone scam that could cost consumers a "small fortune"
Season 5 of Better Call Saul will see the return of two beloved Breaking Bad characters
QUIZ: Can you name all 14 landlocked counties in Ireland?
The JOE Movie Quiz: Week 37
QUIZ: How many of these Recess characters can you name?
Late Late Show's Valentine's Day special are looking for audience members that are single
You may also like
5 hours ago
HBO's documentary series about the Atlanta Child Murders to air in April
1 day ago
15 new documentaries you should be watching on TV in 2020
2 days ago
Here are the brand new TV shows you'll be addicted to in 2020
2 days ago
OFFICIAL: Season 3 of Killing Eve will premiere in April
3 days ago
Sky are launching a new comedy station with some excellent shows in their library
4 days ago
Three-part documentary series about the death of Jeffrey Epstein is being made
Next Page