WATCH: SNL and David Harbour rip the piss out of Joker with Oscar the Grouch trailer

"From the twisted minds at Sesame Workshop."

Whether you thought the Joker was movie of the year or nothing more than an overhyped disappointment, there's no question that Todd Phillip's take on the iconic villain has people talking.

It was only a matter of time before the send-ups of Joaquin Phoenix's performance as The Joker began, and SNL's sketch featuring David Harbour is one for the ages. 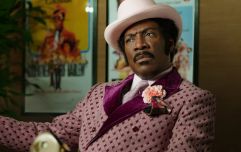 Eddie Murphy reveals the one movie he still regrets turning down

END_OF_DOCUMENT_TOKEN_TO_BE_REPLACED

The trailer is a note-for-note mockery of Joker, the only difference is that it takes place in Sesame Street rather than Gotham, and the gritty anti-hero whose origin we're watching is none other than Oscar the Grouch.

We won't spoil the rest of it for you, just watch it for yourself.

On Twitter, SNL writer Streeter Seidell also added an interesting bit of trivia. Apparently the idea for the sketch came from Harbour himself, with help from UK singer-songwriter Lily Allen.

The Big Reviewski || JOE · The Big Reviewski with Ray Liotta, Goodfellas facts & Tom Hanks making us cry
popular
Four major employers join forces to create Ireland’s first remote working alliance
Netflix has just added arguably the very worst movie of the last decade
Up to 90% of petrol stations in the UK have run dry
Here’s what graduates from Irish colleges can expect to earn in the workplace
Legendary metal band Tool announce first Irish show in over 15 years
Plans for new bank holiday now at an "advanced stage"
QUIZ: How well do you know the Daniel Craig era of James Bond?
You may also like
1 week ago
Comedian Norm Macdonald dies aged 61 after battle with cancer
1 year ago
WATCH: Jason Momoa was properly hilarious as a gigolo on Saturday Night Live
2 years ago
10 of the funniest sketches from SNL Season 44
2 years ago
Adam Sandler's emotional tribute to his friend Chris Farley on SNL is beautiful
2 years ago
WATCH: Emma Stone stars in one of Saturday Night Live's funniest sketches in years
2 years ago
LISTEN: Ariana Grande releases new single 'Thank U, Next', essentially redefining the break-up anthem
Next Page