What a character: Why Hans Moleman from The Simpsons is a TV great

There are certain characters that become so ingrained in pop-culture that they seem to take on a life of their own.

This week, I’m focusing on the hilariously unfortunate, cataracts ridden but utterly brilliant, Hans Moleman. Good Moleman to you.

END_OF_DOCUMENT_TOKEN_TO_BE_REPLACED

Why he's a TV great: The Simpsons arguably has the greatest supporting characters of any TV show so choosing just one to focus on this week was especially difficult. Still though, who doesn't want to learn more about a character that's seemingly indestructible and tastes like a peanut?

Moleman is a pretty interesting dude when you think about it. The former Mayor of Sprinfield had an affair with Lars Ulrich's grandmother, was a sugar truck driver for a while and always carries a gigantic knife in his pocket, handy when his renegade group the 'Mole People' rise-up from the underground.

END_OF_DOCUMENT_TOKEN_TO_BE_REPLACED

It's his hilarious bad luck though that makes him a TV great though. I mean who else could survive all of the following;

His car blowing up, the electric chair, being buried alive, left in an X-ray machine, catching on fire and having an electric drill planted into his head. I wonder if Mr Burns ever did find those lucky charms?

He's always a guaranteed laugh on the show though he's so pathetic, tragic but oddly lovable. Without him, I'd wager that there would be no Father Larry Duff in Father Ted or Unlucky Alf from the Fast Show. They took the idea and ran with it. 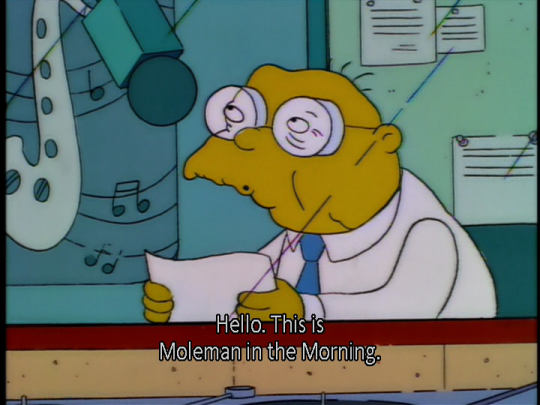 END_OF_DOCUMENT_TOKEN_TO_BE_REPLACED

His best quote: "My name is Hans. Drinking has ruined my life. I'm 31 years old!

If we could put him in any other show: As mentioned previously, I would be very tempted to see what Moleman and Father Larry Duff from Father Ted would be like together. I'd imagine that they might be making a trip to A&E.

His best scene: It could only be this.

popular
Nearly 100 flights delayed at Dublin Airport on Monday
QUIZ: Can you get top marks in this short but tricky Irish geography quiz?
Family of Ashling Murphy share heartbreaking tribute at Fleadh Cheoil
RTÉ tries to solve Michael Collins murder in new documentary
4-year-old girl killed in Sligo caravan park named as Alice Dunleavy
QUIZ: Can you score 12/15 in this difficult General Knowledge Quiz?
The 50 most iconic songs of all time* have been revealed
You may also like
4 days ago
An "unadaptable" adaptation and 8 more new movies & shows to watch this weekend
5 days ago
Netflix reveals full line-up of new shows and movies arriving in August
5 days ago
Amazon Prime Video has just added 27 big movies to its library
6 days ago
Disney+ has just added 18 big movies to its library
1 week ago
6 great new (and classic) additions coming to Prime Video in August
1 week ago
Five years on, we look at the only movie Marvel announced but never actually made
Next Page