What a character: Why Ron Swanson from Parks and Recreation is a TV great

There are certain characters that become so ingrained in pop culture that they seem to take on a life of their own.

With the brilliant news that all seven seasons of Parks and Recreation are now available to watch on Netflix, it's time to focus on that show's greatest character.

It could only be the government-hating, meat-loving, mustache-wearing hero of Pawnee... Ron Swanson. 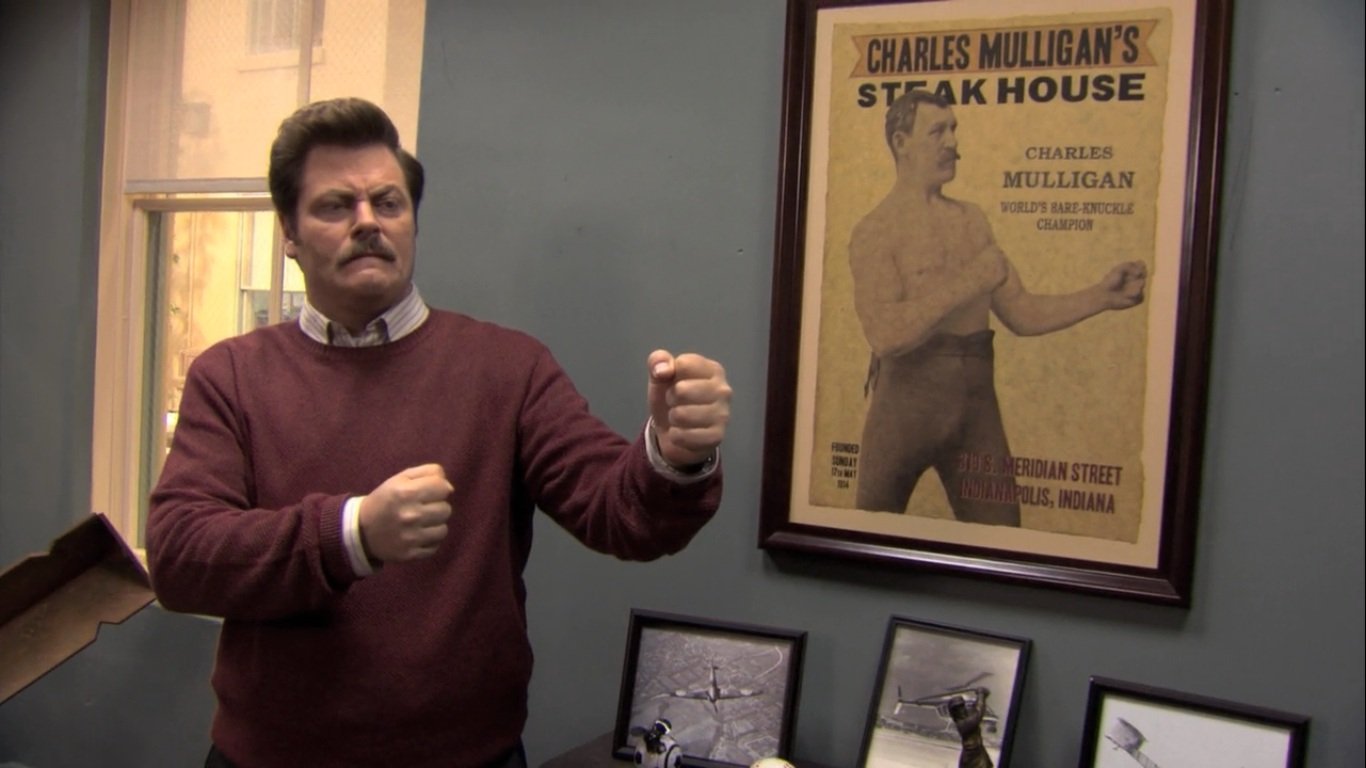 END_OF_DOCUMENT_TOKEN_TO_BE_REPLACED

Why he's a TV great: Parks and Recreation is a wonderful show with an an array of incredible supporting characters, but the core of the show has always been the dynamic between the affectionate, positive and endlessly lovable Leslie Knope and her direct opposite, Ron Swanson.

What's so great about Ron though is that it's almost impossible to separate the actor who plays him, Nick Offerman, and the character because they're so similar. Pawnee's most famous libertarian is an absolute hero.

Ron hates his job, has an unhealthy fixation on meat, loves alcohol, loathes his co-workers and his sexual history reads as "epic and private". His policy on crying is that it's only acceptable at funerals and the Grand Canyon while the Swanson pyramid of greatness can turn "boys to men. From men into gladiators. And from gladiators into Swansons."

END_OF_DOCUMENT_TOKEN_TO_BE_REPLACED

But the real genius of Parks and Recreation lies in those those moments when we get a glimpse at what's under this exterior that's as solid as Oak.

Despite his apathy, disdain for technology and belief that "clear alcohols are for rich women on diets", lies a man that values the important things in life...

END_OF_DOCUMENT_TOKEN_TO_BE_REPLACED

His best quote: There are so many, but I do love his belief that "any dog under 50 pounds is a cat and cats are pointless".

If we could put him in another show: Part of me would really love to see how Ron would last in one of those reality TV shows like Keeping Up With The Kardashians.

His best scene: Everything that you need to know about him is here.

popular
One of the best action movies of recent years is finally available to watch at home
The JOE Friday Pub Quiz: Week 278
Gardaí launch investigation after man's body reportedly brought into post office in Carlow
QUIZ: Can you score 18/18 in this tricky geography quiz?
The 50 most iconic songs of all time* have been revealed
CONFIRMED: Glorious normality beckons as vast majority of restrictions to be scrapped
"It will be with me until I die" - Charlie Bird opens up about "loveliest gesture" from Daniel O'Donnell
You may also like
3 days ago
Peaky Blinders stage show debuting in 2022
4 days ago
One of the greatest Marvel movies ever is among the movies on TV tonight
1 week ago
Tim Allen returning for The Santa Clause series on Disney+
1 week ago
Oh, boy! Quantum Leap is officially getting the reboot treatment
1 week ago
Netflix has a new entry in its top 10 most-viewed original shows of all time
1 week ago
COMPETITION: Kick off 2022 right by winning a €200 One4All voucher
Next Page