"It went the most disgusting piss yellow colour!"

Waaaaaaay back in 2019, in a time before lockdown, a decision was made to film Series 2 and Series 3 of The Young Offenders back-to-back.

END_OF_DOCUMENT_TOKEN_TO_BE_REPLACED

If that crucial decision hadn't happened, you might've been sitting in your house tonight, bored out of your teeny tiny mind, twiddling your over-twiddled thumbs and having to make small talk with your loved ones. AGAIN.

Thankfully though, creator Peter Foott and the gang behind one of Ireland's biggest smash hit TV shows filmed the two series together and now, as a result, we're all in for a treat as Series 3 of The Young Offenders kicks off on RTÉ One at 9.35pm and on BBC One at 9.30pm tonight, Friday 24 July.

Move over Tubs and Norton, there are some new Friday night primetime stars in town. 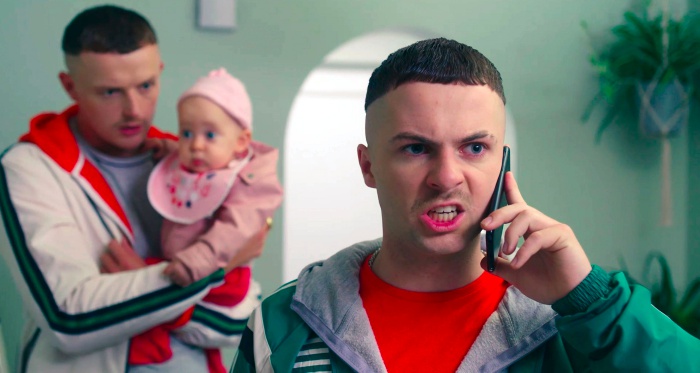 Ahead of the return of Billy Murphy, Ma Mairead, Sergeant Healy, Linda, Siobhan, Principal Walsh and Star the baby, The Big Reviewski caught up with the two bike-stealing best friends, Alex Murphy (Conor) and Chris Walley (Jock), to chat about everything.

And when we say everything, we mean EVERYTHING.

END_OF_DOCUMENT_TOKEN_TO_BE_REPLACED

The two lads were in flying form as they showed off their truly stunning-looking lockdown hair (trust us, it has to be seen to be believed), picked their own personal favourite moment of Series 3 and chatted about special upcoming cameo appearances, the funniest person who cracks them up on set, Justin Timberlake tributes, their love of Normal People, their chain 'beef' with Paul Mescal, Oscar parties, Baby's Day Out, and the all-important question... are they up for The Young Offenders Series 4 AND a movie sequel.

Told you they covered everything. Well, a lot of stuff anyway.

So sit back, relax, make sure your bike is chained up, and enjoy Alex and Chris AKA The Young Offenders...

Here's a sneak peek at the very first look at The Young Offenders Series 3...

For viewers in the north or in the UK, Series 3 will also be available to watch on the BBC iPlayer from Sunday 19 July.

popular
QUIZ: Can you name all these European countries from a list of cities?
The Queen appealing for volunteers to weed the garden of her Sandringham Estate
The 50 most iconic songs of all time* have been revealed
QUIZ: Can you get full marks in this potentially very frustrating general knowledge quiz?
PICS: The man with the biggest penis in the world has one unbelievable problem with it
Met Éireann warn of thunderstorms as Atlantic system set to hit Ireland
The JOE Music Quiz: Week 62
You may also like
1 day ago
Matt Damon planning return trip to Ireland to travel around the country
2 days ago
New Netflix true crime documentary examines three of the biggest heists in US history
2 days ago
One of the most iconic thrillers of all time is among the movies on TV tonight
2 days ago
Five great new movies added to your streaming services this weekend
2 days ago
"Alcohol helps!" - The cast of In The Heights give us some dancing tips
3 days ago
Paul Rudd and Will Ferrell reunite for new dark comedy series The Shrink Next Door
Next Page