WATCH: "Holy f**k!" There is a very gory twist on the latest Irish episode of Don't Tell The Bride

Their dream day is about to be turned into an actual nightmare.

After last week's incredible episode, involving a Harry Potter-themed wedding for someone who had never seen any of the movies or read any of the books, this week's entry of the Irish version of Don't Tell The Bride seems to be taking things to another level entirely.

In this week's episode, Nick has decided that the best route to take for what is sure to be one of the biggest days of his life, is to turn the wedding into a blood-soaked nightmare. 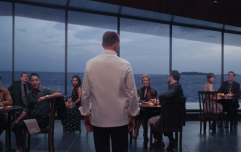 END_OF_DOCUMENT_TOKEN_TO_BE_REPLACED

Yep, a Hallowe'en-themed wedding might seem like a good idea if both members of the couple are super into horror stuff, but we get the impression that his soon-to-be-wife Sarah may not be all that enthused.

He plans on lining up an abandoned building to house the wedding, complete with zombies, cobwebs and very realistic looking stab wounds on the loving couple.

In the NSFW-clip (not because of violence or gore, but because Nick goes pretty heavy on the F-bombs), we see him getting his face ready in preparation, but gets even better when we cut to his blushing bride as she is getting the effects glued to her face, and she has no idea what is coming next...

popular
The Last Of Us Episode Five will premiere days earlier in Ireland and UK
One of the most underrated crime thrillers of recent years is among the movies on TV tonight
Amazon Prime Video has just added 21 big movies to its library
Shock as blues singer beats Adele, Beyonce and Taylor Swift to win Song of the Year Grammy
5 years ago, Hollywood took a massive gamble on a huge sequel... and lost big time
Ben Affleck's bored expression at the Grammys becomes a meme
The first reviews for Hogwarts Legacy are absolutely stellar
You may also like
1 month ago
Sports reporter asked to cover snow storm goes viral thanks to his cranky coverage
2 months ago
Ireland AM star suffers 'double whammy' of slip ups live on air
4 months ago
WATCH: Bridge is officially opened... before immediately collapsing once ribbon is cut
5 months ago
Man explains why some guys don't show their girlfriends on their Instagram story
5 months ago
The Ultimate "That Actor From That Thing" Quiz
7 months ago
The Chase star Bradley Walsh can't control his laughter after the most NSFW answer ever
Next Page