The song itself is a bit of a love letter to all of the strong, independent women around the world.

Drake surprised everyone by doing a mini-Beyonce and dropping new single 'Nice For What' on Friday, as well as an accompanying, all-star music video.

The song is built on a looping, sped-up lyric from Lauryn Hill's 1998 hit ballad 'Ex-Factor', and here Drake has re-purposed it to deliver a few verses on the women that he loves. 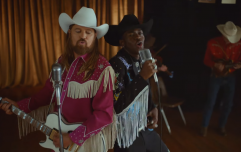 END_OF_DOCUMENT_TOKEN_TO_BE_REPLACED

As far as we can tell, it is the first single from Drake's as-yet-untitled follow up to 2016's release Views, or 2017's mixtape More Life, or 2018's EP Scary Hours, depending on how strictly you define the word "album".

Along with the song is a very eye-catching video directed by Karena Evans (who also directed the video for Drake's 'God's Plan'), it features the singer in what appears to be roller-skates, zipping around an empty room with lots of fancy lights. Either that or the camera is doing some kind of whip-pan trick that only makes it look like Drake is rollerskating.

Either way, we constantly cut back to a series of very famous faces, all doing random things and looking incredibly cool.

Check out the fantastic visual below:

popular
Fish and chips could be removed from Irish menus over rising fuel costs
Netflix has just added 33 very big movies to its library
Increase in passenger charges at Dublin Airport may be on the way
The full list of cancelled flights in and out of Dublin Airport on Monday (so far)
The long-awaited MetroLink is finally happening, for real this time, honest
Jordan Peterson suspended from Twitter over Elliot Page comment, says he won't apologise
Government considering giving public €200 again to assist with rising energy costs
You may also like
3 years ago
WATCH: Liverpool fans sing Virgil van Djik chant to the tune of a classic trad anthem
4 years ago
LISTEN: Gorillaz have just released arguably the most summer-y sounding song ever
4 years ago
Jeffrey Dean Morgan thinks his version of 'Galway Girl' in PS I Love You is much better than Ed Sheeran's
4 years ago
WATCH: Arcade Fire cover The Cranberries' song 'Linger' during Dublin gig
4 years ago
LISTEN: Check out 'Together', Ireland's official Eurovision 2018 entry
4 years ago
WATCH: 81-year-old Evelyn had the nation in tears on the first episode of Ireland's Got Talent
Next Page