It didn't sit well with some people...

David Flaherty, from Galway, is now living over in London. A drummer, he's been in various bands over the years but he recently bought a guitar and decided to try his hand at writing a few songs. 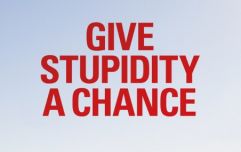 LISTEN: It isn't difficult to figure out what Pet Shop Boys' new song is about

END_OF_DOCUMENT_TOKEN_TO_BE_REPLACED

He wrote a song last year called 'Snowflakes' and, well, you probably see where this is going.

The lyrics of the song are based around the failed Remain referendum campaign, the subsequent fall-out, political correctness and his belief that millennials are obsessed with social media and likes.

It was recorded in November last year and he made 30 CDs, sending them around to various radio DJs in the UK.

The song was played yesterday by high profile radio DJ Steve Lamacq - the man credited with launching the careers of Oasis, Blur and Coldplay, among others - on the BBC Radio 6 music show.

Have a listen below...

'Snowflakes' did not sit well with some people, however, who took offence to the lyrics of the song...

okay what the fuck, now radio 6 is playing a song called "snowflakes", which is about exactly what I think it is

The song in question, in case you think I'm imagining this pic.twitter.com/4p8UpJpgKd

popular
HSE urges public to stop using popular e-cigarette
2022 looks like it will finally be Hollywood’s big coming out party
President Michael D. Higgins leads the Late Late line-up this week
QUIZ: Can you name all the US States that contain 8 letters?
Ryanair recruiting for over 100 positions at Dublin Airport
The spiritual successor to Roger Rabbit and 7 more movies and shows to watch this weekend
You may also like
1 week ago
Plan to suspend Northern Ireland Protocol reportedly "days away"
1 week ago
Mary Lou McDonald says UK Government "gamesmanship" over Northern Ireland Protocol won't be tolerated
3 weeks ago
Listeners praise Patrick Kielty following emotional interview discussing his father's murder
1 month ago
Former Brexit minister hits back at Simon Coveney over Irish border comments
5 months ago
UK government "doesn't give a damn" about Ireland, says Pearse Doherty
5 months ago
Travel from Ireland to UK unaffected by new Covid measures to tackle Omicron
Next Page