REWIND: 20 years ago, Slipknot unleashed a most ferocious debut

"Yeah, but, they wear masks lolz!"

Now that we've gotten that complex argument from Cool Guys that exclusively listen to The Beatles or Rachmaninoff out of the way, let us celebrate.

END_OF_DOCUMENT_TOKEN_TO_BE_REPLACED

I'm not quite sure just how this has happened, but it has now officially been 20 years since Slipknot burst onto the scene with their eponymous debut album.

Fans will of course know that the self-titled effort isn't technically their first real shot in anger.

That would be 1996's Mate. Feed. Kill. Repeat. but that's really more of a demo record with different members including vocalist Anders Colsefini and a clutch of songs that would one day be resurrected and repurposed when Slipknot found their true voice.

MFKR shouldn't be dismissed outright; it deserves its place in Slipknot lore, certainly, though it isn't the fully formed monster that brought them to the dance.

END_OF_DOCUMENT_TOKEN_TO_BE_REPLACED

Nor does it boast the talents of one Corey Taylor; handily one of the most iconic orators in modern metal, and not just because of his dreadlocked visage.

Taylor is famous for popularising - or, at the very least, greatly boosting - the screaming/singing balance that many a frontman would opt for during the nu metal days, but Taylor soared above them all, and nu metal itself for that matter.

His - and by extension, the 18-legged beast that he spearheads - marriage of pop-tinted melody and gravel-throated growling was no betrayal of a cherished genre but rather the revitalisation of it, carried forward with brave and bold delivery.

Slipknot isn't the best Slipknot album - that would be Vol. 3: (The Subliminal Verses) aka The One With 'Duality' On It - but it is an exceptional debut offering.

END_OF_DOCUMENT_TOKEN_TO_BE_REPLACED

Wonderfully aggressive, strangely beautiful and utterly relentless; Slipknot was, in many ways, the perfect album to get passed your way in Economics class (thanks whoever that was, my brain has forgotten your features) and one to play very loud and very often on a terrible ghetto blaster within earshot of concerned parents.

There's plenty of angst, of course, but much more besides. Disciples of Slayer, Pantera, Metallica et al no doubt scoffed at these new boiler suits on the block, but this was rebellion for many a young soul, packaged in short, brutal bursts and positively dripping with intrigue.

That latter aspect was helped along hugely by a turn-of-the-century lack of high speed Internet and reliance on magazines and Kerrang! TV to get your occasional, oh-so-slight fix.

Hey, did you know that that they have three drummers?

Apparently the clown guy inhales from a jar with a dead crow in it during gigs in order to vomit on cue.

Man, they almost burned that Reading stage to the ground, they'll never be allowed back.

Did you hear they once dumped a box of live puppies into a crowd and said they wouldn't play until all of them were dead?

Yeah I know they said that about Ozzy Osbourne and Marilyn Manson and others and surely at least one of them would still be in jail over it, but it happened, dude, I swear. My mate's cousin was there.

There was even the long-running schoolyard anecdote that the National Parents Council intervened to block Slipknot's maiden Irish voyage for Helen Lovejoy-based reasons, though nobody, Corey Taylor included, seems to have the indisputable facts. 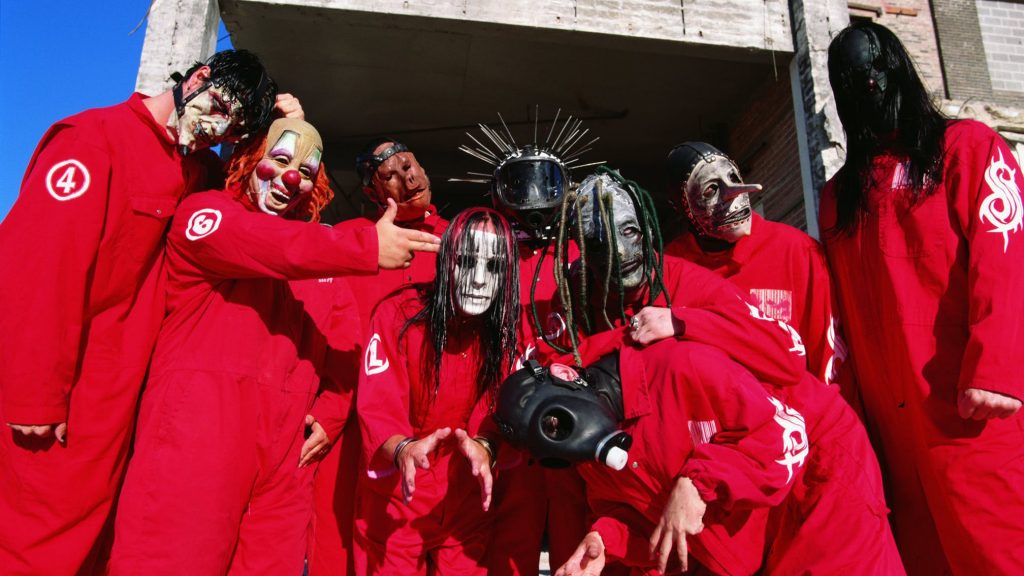 What isn't up for debate - seriously, don't @ us - is that Slipknot's blistering first shockwave stands as one of the most innovative, intense and ridiculously enjoyable introductions to any band, heavy or otherwise.

It set the scene for a career that still beats with brilliant life today, even after band tragedies and personnel changes left their respective scars.

As it stands, Slipknot are gearing up to release sixth album We Are Not Your Kind in August, and they sound in very rude health indeed.

For this writer, they'll always feel special, a pathway into discovering a passion for music for a teenager who, like so many others, felt misunderstood and angry.

Here was release, empowerment, catharsis and a mesmerising flood of other emotions splintered into jagged jigsaw pieces.

As a hardcore fan, I'm grateful for every new Slipknot chapter and always hopeful that I'll get to see them live one last time - there's always the lingering sense that the next album could spell the end - but you never forget your first, right?

Oh, and, they wear masks. Lolz.

This is not easy.

As an album, Slipknot is unquestionably front-loaded to the point where not picking the first five tracks proper just feels irresponsible and wrong.

The back half of Slipknot absolutely bangs, too, and thus one is loathe to shut out the highlights, but, again, those first five!

20 years on, 'Tattered & Torn' continues to register as little more than a skippable irritation - even if it supposedly is Clown's favourite song - so that one goes out early doors.

'Purity', a lock otherwise, is disqualified due to being deleted from the initial release and later restored on the 10th anniversary edition due to contentious 'Is it about a real murder or not?' reasons.

After much difficult consideration, here are the five finest cuts on Slipknot...

A toss-up between this and 'Spit It Out', and a close one.

While that tune's 'Jump the fuck up!' live staple is a rite of passage, 'Surfacing' and its signature profane refrain is a sacred commandment to this day and cannot be ignored.

Consider 'Scissors' the prototype for the likes of 'Iowa' and the extended version of 'Danger Keep Away', and a highly compelling journey in its own right.

THE pop hit of 1999 and I'll fight anyone who contends otherwise.

A young and hungry band in microcosm.

'(sic)' is an unstoppable barrage, as vital now as when you first heard it. This is where every Slipknot playlist or passionate recommend starts.

After that, there should be no going back.

All clips via Slipknot

popular
The JOE Friday Pub Quiz: Week 331
New Netflix series deserves to be as big as Stranger Things
QUIZ: JOE's Big News Of The Day Quiz #39
Couple left mortified after best man delivers incredible punchline during speech
Forspoken breaks the golden rule of gaming... and not in a good way
BBC apologises after calling Paul Mescal 'British' in Oscar coverage
Irish names among the top 10 hardest words for British people to pronounce
You may also like
1 week ago
The Last Of Us Episode One features an absolutely perfect needle drop
2 weeks ago
The JOE Friday Pub Quiz: Week 329
2 weeks ago
Eminem turned down $8m to perform with 50 Cent at the World Cup in Qatar
2 weeks ago
Dr Dre forces right-wing politician to stop using his song
2 weeks ago
RTÉ Choice Prize Irish Album of the Year 2022 nominees revealed
2 weeks ago
Radiohead say they're going to 'get together' in early 2023
Next Page