The most popular drugs at music festivals have been revealed

Down with this sort of thing.

We know, we're as shocked as you are.

END_OF_DOCUMENT_TOKEN_TO_BE_REPLACED

All joking on what is a serious issue aside, addiction treatment website DrugAbuse.com have determined the most popular drugs at 15 music festivals (mostly in the USA) by examining over 3.5 million Instagram posts from those festivals and spotting the drugs referenced in the posts.

As pointed out on i100, using Instagram to collect the data isn't exactly a scientific approach and it will baffle many as to why so many people are referencing drugs on their own personal Instagram accounts.

The results, though, are still worth a look. 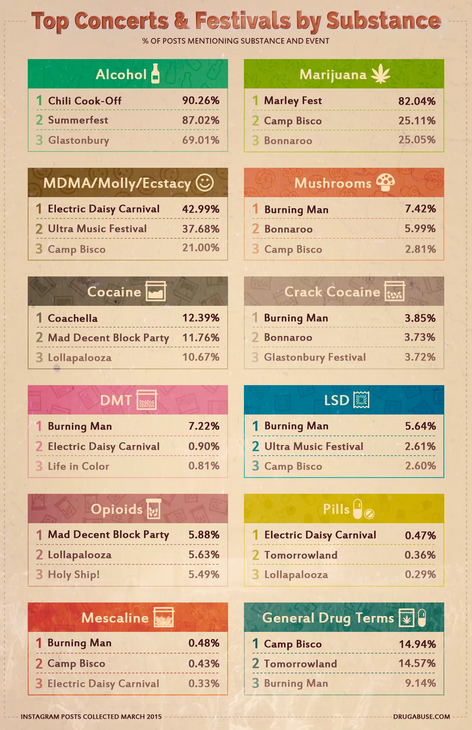 It's not exactly a huge surprise, for example, to discover that marijuana was popular at the Marley Festival or that MDMA and Ecstacy were referenced a lot at the Electric Daisy Carnival.

Nor is it a huge suprise, in our favourite revelation from the study, that alcohol was referenced very frequently in posts relating to the Chili Cook-Off.

Although no Irish festivals were examined as part of the study, it would be naive to think that illicit drugs won't be present at some of them coming up over the summer.

Just remember what Mr. Mackey had to say lads...

popular
Gardaí warning people not to make unnecessary journeys in anticipation of Storm Barra
Man dies after being attacked by newly calved cow in Mayo
Carlow woman banned from keeping animals for life after starving dogs to death
The JOE Movie Quiz: Week 131
"Danger to life" risk with Storm Barra "weather bomb", warns Met Éireann
An underseen Keanu Reeves adventure is among the movies on TV tonight
QUIZ: Can you get full marks in this General Knowledge Quiz?
You may also like
1 month ago
Travis Scott says he is "absolutely devastated" after eight die at Astroworld festival
1 month ago
At least eight dead and several injured in crush at Travis Scott's Astroworld festival
1 month ago
Christy Moore has announced 10 nights at Vicar Street starting next month
1 month ago
WATCH: Peter Jackson's much-anticipated Beatles documentary looks like a treasure trove
1 month ago
Musicians say reintroduction of restrictions in winter would be "detrimental" ahead of clubs reopening
1 month ago
Dave Grohl speaks about how a trip to Kerry inspired him to set up Foo Fighters
Next Page