Over 1,000 people to protest Donald Trump's #TravelBan in Dublin on Thursday

Will you join the protest?

There's been plenty of social media activism in Ireland since US president Donald J. Trump came into power last week, but later this week people will take to the streets.

The new leader of the free world has caused outrage with his new policies including the travel ban on Muslims and refugees which has been a huge news story over the last few days.

END_OF_DOCUMENT_TOKEN_TO_BE_REPLACED

President Trump signed an order which means people from Iran, Iraq, Libya, Somalia, Sudan, Syria and Yemen travelling to America via Ireland are likely to be detained here.

United Against Racism Ireland has reacted to that by organising a protest rally outside the US Embassy in Dublin on Thursday evening. Here's the location. 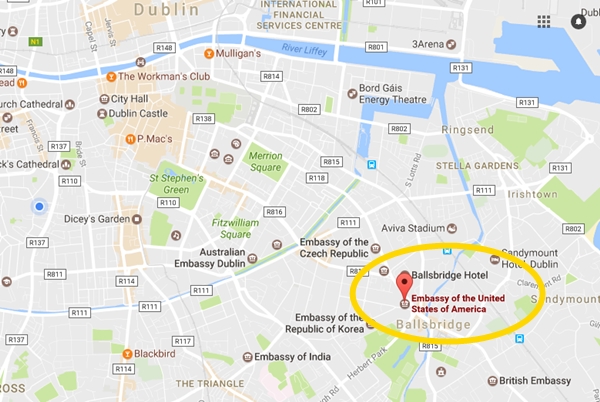 The Facebook event page (No to Trump's Travel Ban on Muslims & Refugees) has over 1,200 people pledging to go while another 2,000 people are interested in the event

It's scheduled to take place between 6:00pm and 7:30pm and you can find the event page by clicking here. It'll be interesting to see how many people show up.

Advertisement
popular
CONFIRMED: Nightclubs to open at 100% capacity, 11.30pm curfew has been removed
QUIZ: Can you name all the countries beginning with L?
Brian Laundrie: 'Strong probability' remains found belong to missing fiance
Over 300 vehicles detected speeding in first 10 hours of national 'Slow Down' operation
How to lower your cholesterol - 5 really handy tips
Here's the lineup for this week's Late Late Show
The cast of Succession on the most ridiculously expensive scene in the show
You may also like
1 day ago
WATCH: Micheál Martin and Danny Healy-Rae had an almighty row in the Dáil
1 day ago
Covid-19 pandemic now growing again in Ireland – NPHET
1 day ago
Government asks for "another 24 hours" on nightlife sector reopening plan
1 day ago
Man aged in his 80s dies following three-car collision in Kildare
1 day ago
Simon Harris "surprised" by lack of booster programme for healthcare workers
1 day ago
Gardaí will be out in force pulling for speed this week
Next Page