Approximately 10 cars are being clamped per day at the Red Cow Luas Park & Ride.

Of the 2,927 clamped between 1 January and 3 November last year, 1,218 drivers appealed the fine and 525 of these drivers were successful. 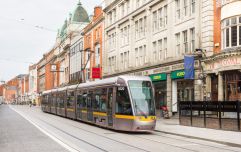 END_OF_DOCUMENT_TOKEN_TO_BE_REPLACED

In a statement issued on Tuesday morning, Curran said: "I had received many calls to my constituency office in Clondalkin in relation to the difficulties people were having with the ticket machines at the Red Cow Luas Park & Ride," and that drivers would return to "find their cars clamped at the end of their working day causing a huge cost and inconvenience."

"People have complained that the machines appear to not be allowing them to input their correct car registration numbers but is accepting full payment. On return to their cars, however, a clamp has been applied with the cost of €80 for clamp removal.

"These machines are not fit for purpose. People are paying, and it is unfair to cause this fine and inconvenience because of faulty machines."

"TII and Luas must come together immediately to come up with a solution," Curran said.

House of Rugby Ireland · Quinn Roux on finding a home in Ireland and Mike McCarthy brings the absolute HEAT!
popular
QUIZ: Can you name all of these countries just from one of their cities?
The 50 most iconic songs of all time* have been revealed
The JOE Movie Quiz: Week 86
Warner Bros. plan new Harry Potter movie and they want Daniel Radcliffe to star in it (Report)
PICS: The man with the biggest penis in the world has one unbelievable problem with it
The JOE Friday Pub Quiz: Week 227
Police called to illegal rave to find pensioners queuing for vaccine
You may also like
2 months ago
Luas report anti-mask group to Gardaí
5 months ago
Four new stops to be added to Luas green line with Luas Finglas extension
9 months ago
Red Line Luas collides with truck in Dublin
1 year ago
Half of the Luas green line stops out of action until Sunday
1 year ago
Luas to extend further into North Dublin as part of new plans
1 year ago
"Significant" delays on Irish Rail services in Dublin due to overnight vandalism
Next Page