Donegal County Council has confirmed that they are responding to a "substantial flooding event" in the south of the county throughout the day (Friday 4 October).

The northwest coast of Ireland took the brunt of Storm Lorenzo in the early hours of Friday morning. Lorenzo began life as a Category 5 hurricane before making landfall in Ireland yesterday.

In a statement issued this afternoon, Donegal County Council provided details of several flooding incidents across the county.

"Donegal County Council Fire Service responded to an initial call out at 5.40am this morning at New Row in Donegal Town where 1 no. house and 4 no. commercial premises were affected with flooding," the statement reads.

"Further properties in the Brookefield (5 dwellings) and Clarendon Drive (6-8 dwellings) areas of the town were also affected by flooding as was a green area at St. John Bosco Centre at Drumrooske in Donegal Town. 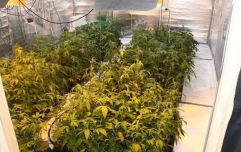 Hundreds of cannabis plants worth €400,000 seized in Donegal

END_OF_DOCUMENT_TOKEN_TO_BE_REPLACED

"Donegal County Council Roads crews also responded with 2 no. high volume pumps and sandbagging in areas of Donegal Town and were assisted by Donegal Civil Defence."

The housing service of the council is now engaging with those who have been displaced by the flooding.


popular
Downton Abbey creator confirms plans to start work on a sequel
QUIZ: How many of these characters from Breaking Bad can you name?
QUIZ: How many of these Recess characters can you name?
WATCH: Trailer released for CG remake of Pokémon: Mewtwo Strikes Back
Disney+ has brought forward its launch date in Ireland and confirmed its price
20 employees in Cork suspended from work for their Christmas party behaviour
Noel Rock asked for less alcoholic beer to be sent to the Mansion House just as his Fianna Fáil rival was elected Lord Mayor
You may also like
2 weeks ago
Gardaí appealing for witnesses following "serious" traffic collision in Donegal
3 weeks ago
Woman in her 20s dies after car crash in Donegal
3 weeks ago
A man in his 30s has died following a single vehicle crash in Donegal
1 month ago
Met Éireann issues wind warning for Donegal ahead of nationwide "freezing fog" next week
2 months ago
Man drowns after car slips into water off Donegal pier
3 months ago
Two teenage boys are seriously injured after being hit by a bus in Donegal
Next Page