Garda Adrian Donohoe was killed in the line of duty seven years ago.

Aaron Brady has been sentenced to life in prison following the murder of Detective Garda Adrian Donohoe.

Donohoe was shot and killed during a robbery at the Lordship Credit Union in Louth on 25 January 2013. 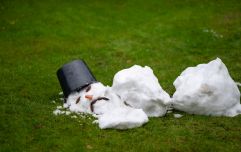 END_OF_DOCUMENT_TOKEN_TO_BE_REPLACED

As a result of his life sentence, Aaron Brady must serve a minimum of 40 years in prison.

Gardaí said that the criminal investigation into the incident remains live as the other members of Brady's gang remain to be brought before the courts.

A spokesperson for the Gardaí said: "The commitment and tenacity of the investigation team based at Dundalk Garda Station to bring all suspects to justice remains steadfast."

Speaking after the sentencing, Garda Commissioner Drew Harris said: "My thoughts and those of the Garda Organisation are once again today with Adrian Donohoe’s family.

"We in An Garda Síochána will continue to support the family, and the friends and colleagues of Adrian.

"An Garda Síochana's resolve to bring all the participants in this crime to justice remains firm and the investigation team at Dundalk will continue to be supported by the resources of the wider organisation.”

"An Garda Síochána appeals to any person with any information with respect to the murder of Detective Garda Adrian Donohoe to come forward to detectives with that information.