'Everything is on the table.'

Alec Baldwin may be subject to criminal charges following the fatal shooting that took place on the Rust film set last week, according to a US prosecutor.

Baldwin, 63, discharged a firearm on the set of Rust in an accident that killed 42-year-old director of photography Halyna Hutchins and injured director Joel Souza.

END_OF_DOCUMENT_TOKEN_TO_BE_REPLACED

The shooting at Bonanza Creek Ranch in Santa Fe, New Mexico, happened in the middle of a scene that was being rehearsed.

It has been reported that Baldwin was informed that the device he was using was "cold" and thus not loaded.

With an investigation underway, Santa Fe County district attorney Mary Cormack-Altwies has said her team "haven't ruled anything out" at this juncture and that prosecution may follow.

"Everything at this point, including criminal charges, is on the table," she said.

The New York Times reports that the investigation is particularly focusing on ballistics and precisely what kind of round was responsible for killing Halyna Hutchins.

“There were an enormous amount of bullets on this set, and we need to find out what kinds they were,” Carmack-Altwies said.

The district attorney has moved to dispel previous accounts that the gun used by Baldwin was a prop.

Woman in her 90s dies following road crash in Clare

END_OF_DOCUMENT_TOKEN_TO_BE_REPLACED

"It was a legit gun," she said. "It was an antique-era appropriate gun."

According to an account provided by Rust director Joel Souza, the incident occurred as Baldwin was practicing a "cross draw" for an upcoming scene.

"Joel stated that they had Alec sitting in a pew in a church building setting, and he was practicing a cross draw. Joel said he was looking over the shoulder of (Hutchins), when he heard what sounded like a whip and then loud pop.

"Joel then vaguely remembers (Hutchins) complaining about her stomach and grabbing her midsection. 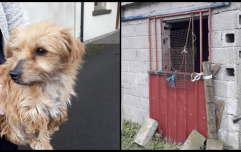 END_OF_DOCUMENT_TOKEN_TO_BE_REPLACED

"Joel also said (Hutchins) began to stumble backwards and she was assisted to the ground."

On Friday evening, Baldwin expressed his "shock and sadness" over the incident.

"There are no words to convey my shock and sadness regarding the tragic accident that took the life of Halyna Hutchins, a wife, mother and deeply admired colleague of ours," he said on Twitter.

"I'm fully cooperating with the police investigation to address how this tragedy occurred and I am in touch with her husband, offering my support to him and his family.

"My heart is broken for her husband, their son, and all who knew and loved Halyna," Baldwin concluded.

popular
More counties issued with weather warnings as Storm Barra hits Ireland
These are the most generous counties in Ireland, according to GoFundMe
Schools affected by Storm Barra expected to reopen tomorrow, says Minister
Woman in her 30s injured after falling from balcony in Cork city
"Absolutely no follow-up" on contact tracing in nightclubs and live venues
Woman in her 90s dies following road crash in Clare
An underseen Keanu Reeves adventure is among the movies on TV tonight
You may also like
1 day ago
Man dies after being attacked by newly calved cow in Mayo
3 days ago
Teenage girl seriously injured after collision between scooter and van in Dublin
4 days ago
Man seriously injured after shooting incident in Tallaght
5 days ago
Gardaí seize 38 dogs and other exotic animals in Dublin
5 days ago
A woman has died and several injured after fatal Kilkenny crash
5 days ago
Alec Baldwin breaks down in tears in first extensive interview since film set shooting
Next Page