Alone, the charity for older people, has launched a unique new fundraiser to combat ageism.

Teaming up with Dublin tattoo parlour The Ink Factory, Alone will provide five service-users with a tattoo of their choosing.

END_OF_DOCUMENT_TOKEN_TO_BE_REPLACED

The 'Bucket Listers' project aims to empower older people by fighting the stigma associated with ageing.

Over the next four weeks, regular videos will introduce the five Bucket Listers in question, outlining each person's experience with Alone and their hopes for their new tattoo.

After that, they'll all go under the needle on Sunday 9 September.

One of the Bucket Listers, Michael McCarthy, has been with the charity for the last 12 months.

"They’ve been very good to me over the year," says Michael.

"When I signed up with them, I was losing my own home. It’s very important as you get older to have friends, and that’s what I like about Alone.”

As part of the project, The Ink Factory will raise funds for Alone by inviting the public to sponsor each individual tattoo, with 100% of online donations going directly to the charity. 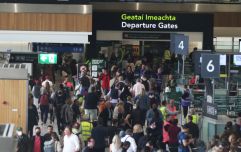 END_OF_DOCUMENT_TOKEN_TO_BE_REPLACED

“We’re delighted to team up with Alone to launch the Bucket Listers project to both raise funds for this amazing charity and fight the negative perceptions met by older people," said Ink Factory owner Tom Lynch.

"Inclusivity is a major part of the Ink Factory DNA and we’re excited for our artists to donate their talents, providing a tattoo for each of the five lovely older people taking part.”

For those who have concerns about their own wellbeing, or the wellbeing of a vulnerable older person in the community, Alone can be contacted on (01) 679 1032 or at the official website.

Established in 1977, the charity, which depends on donations from the public, has staff and volunteers ready to act on calls and requests for assistance.