Gardaí also dispersed large groups of youths at Howth after a 16-year-old was assaulted and removed by ambulance.

At approximately 4.45pm at the East pier in Howth, Gardaí dispersed groups of youths following an incident in which a 16-year-old youth was assaulted.

Gardaí will use "discretion" over outdoor drinking at pubs and restaurants

END_OF_DOCUMENT_TOKEN_TO_BE_REPLACED

It’s understood the youth fell from the pier onto rocks in the course of a disturbance involving large groups of youths.

The injured youth was treated at the scene and removed by ambulance to Beaumont Hospital as a precaution.

His injuries are not thought to be life-threatening and he did not require hospital treatment.

Two male youths, aged in their mid-teens, were arrested at the scene for public order offences.

It’s understood DART services were disrupted for a short time while order was being restored.

In a separate incident, Gardaí attended the scene of an incident at Kilbarrack DART Station involving a large group of youths, shortly after 5.30pm.

In the course of the incident a 14-year-old male youth sustained an injury to his head. 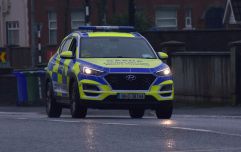 END_OF_DOCUMENT_TOKEN_TO_BE_REPLACED

While administering treatment to the injured youth, ambulance personnel came under attack from youths at the scene. Gardaí intervened and were assaulted as they attempted to disperse the youths.

Investigations into both incidents are ongoing. Anyone with information is asked to contact Raheny Garda Station 01 6664300 or the Garda Confidential Line 1800 666 111.