First Minister of the Northern Ireland Arlene Foster has called on deputy First Minister Michelle O'Neill to apologise for an apparent lack of physical distancing and safety measures at the funeral of party member Bobby Storey.

Speaking on Wednesday morning, the DUP leader said: "It is quite intolerable now that people think that there are some people to whom the law doesn't apply and that indeed there are some politicians who are saying: 'Do as I say but not as I do'. 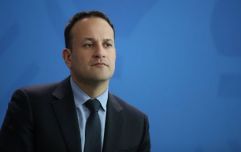 END_OF_DOCUMENT_TOKEN_TO_BE_REPLACED

"That undermines everything that we have been trying to do. She needs to apologise, she needs to recognise the wrong that has been done and she absolutely needs to make amends for what has happened."

Other DUP and SDLP party members have criticised the gathering, insisting that it sets the wrong example for the public, who are advised to avoid large gatherings and practice social distancing.

Photographs from the scene appear to show hundreds of people gathered to watch the hearse on its way to the church, as well as inside the graveyard. The Police Service of Northern Ireland (PSNI) have since said they will review footage from the funeral procession and determine whether any rules have been broken.

The Big Reviewski || JOE · TBR Spotlight: The Falcon and the Winter Soldier Episode Four - 'The Whole World is Watching'
popular
Beware of the very clever WhatsApp hack that is locking Irish users out of their accounts
Marvel's shows on Disney Plus are giving great actors the chance to give great performances
JD Sports to open warehouse in Ireland this year after Brexit-related disruptions
Motor insurance costs set to fall from June after changes to payout guidelines
QUIZ: Can you name all these European countries from a list of cities?
The 50 most iconic songs of all time* have been revealed
The JOE Friday Pub Quiz: Week 238
You may also like
1 month ago
Sinn Féin group place ads in US newspapers for Irish unity referendum
4 months ago
Simon Coveney describes Sinn Féin TD’s tweet about IRA attacks as “really insensitive and stupid”
4 months ago
Latest Red C poll suggests highest ever support for Sinn Féin
5 months ago
Sinn Féin tables motion of no-confidence in Leo Varadkar
5 months ago
Sinn Féin seeks to ban co-living and build-to-rent developments in new bill
6 months ago
Demolition of 1916 leader O'Rahilly house an "act of corporate vandalism"
Next Page