"He sought a coup by misleading people with lies."

Arnold Schwarzenegger has condemned last week's violence at the US Capitol.

In doing so, the Hollywood star and former Governor of California laid the blame at President Donald Trump.

END_OF_DOCUMENT_TOKEN_TO_BE_REPLACED

He also likened the US Capitol insurrection to Kristallnacht, a wave of anti-Semitic violence perpetrated by the Nazi Party and its sympathisers in 1938.

Schwarzenegger began his seven-minute speech by recalling events in his birthplace of Austria.

He said: "I grew up in Austria. I'm very aware of Kristallnacht, or the Night of Broken Glass.

"It was a night of rampage against the Jews carried out in 1938 by the Nazi equivalent of the Proud Boys. Wednesday was the Day of Broken Glass right here in the United States."

Those involved in the attempted coup undermined democracy and the fundamental principles underpinning the United States, Schwarzenegger said.

"They did not just break down the doors of the building of American democracy. They trampled the very principles on which our country was founded."

My message to my fellow Americans and friends around the world following this week's attack on the Capitol. pic.twitter.com/blOy35LWJ5 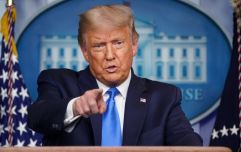 END_OF_DOCUMENT_TOKEN_TO_BE_REPLACED

Schwarzenegger said he witnessed, first-hand, similar events occurring in his homeland after the breakdown in democracy surrounding the Second World War.

"I've never shared this because it's a painful memory, but my father would come home drunk ... and he would scream and hit us and scare my mother."

"It all started with lies and intolerance," Schwarzenegger said, adding "there is fear ... something like this could happen right here".

END_OF_DOCUMENT_TOKEN_TO_BE_REPLACED

Schwarzenegger then took a swipe at Donald Trump, whom he blamed for instigating the uprising.

"President Trump sought to overturn the results of an election, and of a fair election.

"He sought a coup by misleading people with lies."

Trump refused to accept Joe Biden as the presidential election's projected winner on 7 November, and has constantly referred to the election as "fraudulent".

No evidence of this has ever been proven, but it is Trump's 'Stop The Steal' march which preceded Wednesday's insurrection at the US Capitol.

Despite admitting that there would be a new administration in place on January 20th, Trump has refused to completely condemn the violence perpetrated by his supporters.

Schwarzenegger concluded his video by reminding Americans to "look past ourselves, our parties and our disagreements".

He then sent President-Elect Joe Biden his best wishes, adding "we wish you a great success".

popular
Gardaí seize phone of Dublin publican amid Leo Varadkar leak inquiry
"Genius" Irish woman pretends to work in Penneys to shop without appointment
Here's the lineup for this week's episode of The Late Late Show
HSE shuts down IT system after "significant" ransomware attack
Three teens arrested in connection with incident at Howth Junction where teen girl was knocked onto train tracks
QUIZ: How many of these characters from The Simpsons can you name?
Pat Kenny calls Stephen Donnelly's antigen test stance "propaganda" during heated debate
You may also like
1 month ago
Donald Trump is reportedly creating his own social media platform
3 months ago
New footage from Capitol Hill riots shows rioters chanting "Hang Mike Pence"
3 months ago
Donald Trump hints at potential second term as he officially leaves White House
3 months ago
Pardonpalooza: Donald Trump planning 100 pardons on last day of presidency
3 months ago
Joe Exotic has limo waiting as he expects presidential pardon from Donald Trump
3 months ago
Macaulay Culkin calls for Donald Trump cameo to be removed from Home Alone 2
Next Page