As Irish Rail strike begins, a Dublin bridge is shut down in order to film a television advert

On the same day that the Irish Rail strike began, this did nothing to help traffic in the capital.

Reports that U2 have shut down the Samuel Beckett Bridge to film a new video appear to be wide of the mark, although the Dublin landmark does remain closed to traffic on the same day that the Irish Rail strike kicks into gear.

The Irish Independent reported that the Dublin band were filming their latest video on the same day that the two-day stoppage causes traffic chaos for Dubliners. 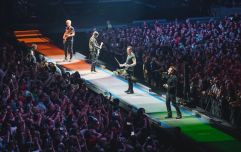 END_OF_DOCUMENT_TOKEN_TO_BE_REPLACED

However, it has since emerged that Guinness are filming an advert about Irish music in a move that will still draw consternation from people looking to make their way across the Liffey

Up to 100,000 commuters are set to be affected on Monday, with further 24-hour strikes expected during the All-Ireland hurling and football finals on September 7th and 21st.

popular
The 50 most iconic songs of all time* have been revealed
The JOE Movie Quiz: Week 97
PICS: The man with the biggest penis in the world has one unbelievable problem with it
People think they've figured out the ranking of the viewers on your Instagram Stories
The JOE Friday Pub Quiz: Week 238
WATCH: This episode of Tellytubbies was so creepy it was banned from TV
QUIZ: How well do you know the Marvel movies?
You may also like
5 months ago
The JOE Music Quiz: Week 31 - Special U2 Edition
1 year ago
"We wanted to get out of school as badly as possible" - Inhaler in conversation
1 year ago
U2's Larry Mullen Jr. writes heartfelt tribute to the late, great Larry Gogan
1 year ago
"I’m still trying to write the song that will save the world" - Danny O'Donoghue rewrites The Script
2 years ago
WATCH: Damien Rice, U2, Imelda May and more perform at Dublin's annual Christmas Eve busking session
2 years ago
Do we like Bono or not? Exploring one of Ireland's greatest dilemmas
Next Page