A petition to change the name of Australia's official currency to 'dollarydoos' has over 7,000 signatures.

It is, of course, all thanks to The Simpsons. 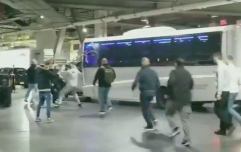 Conor McGregor charged with 3 counts of assault in New York

END_OF_DOCUMENT_TOKEN_TO_BE_REPLACED

A petition on Change.org has gathered thousands of signatures and the attention of the world's media.

“Due to global commodity prices plummeting, the Australian economy is struggling,” reads the petition by Thomas Probst.

It is addressed to Shadow Minister for Communications & Broadband Malcolm Turnbull, as well as three other lawmakers.

The motivation behind the change might even be crazy enough to work.

popular
Beware of the very clever WhatsApp hack that is locking Irish users out of their accounts
Motor insurance costs set to fall from June after changes to payout guidelines
Reeling in the Years was watched by over half a million people last night
Making A Murderer: The explosive and NSFW telephone call that implicates a new killer
The 50 most iconic songs of all time* have been revealed
NIAC recommends AstraZeneca vaccine should only be given to people 60 and over in Ireland
Line of Duty fans think they've worked out who Jo Davidson's mystery relative is
You may also like
3 years ago
Climate change and homelessness to be tackled in a major new nationwide movement
4 years ago
VIDEO: Filmmaker Ken Burns' entire Donald Trump takedown in all its glory
4 years ago
VIDEO: "He looked like he was auditioning for The Godfather": Aussie minister on Johnny Depp
5 years ago
VIDEO: This short clip explains what you need to know about the Panama Papers
5 years ago
PIC: An extraordinary image of Air Force One landing in Cuba
5 years ago
VIDEO: North Korea threatens to drop a hydrogen bomb on Manhattan
Next Page