The smell of beer from your car may become a regular delight.

One thing we do know is New Zealand have created a biofuel made from beer waste with the intention of fueling motor vehicles in the not-too-distant future.

Seriously, this is a real thing, we wouldn't lie to you about something as serious as beer fuel.

The fuel is created from the leftover yeast which is distilled to 95 per cent ethanol. Gull then refine the ethanol and blend it with petroleum making a petrol fuel which is better for the environment. 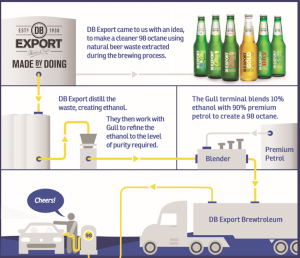 The first batch to hit the market should be ready in 6 weeks with DB Breweries promoting their beer as 'Drink DB export, save the entire world.'

A bit of an exaggeration surely.

The Big Reviewski || JOE · TBR Spotlight: Loki - Episode Two - 'The Variant'
popular
Garda union hits out at "absolute confusion" over outdoor drinking and dining
Gardaí will use "discretion" over outdoor drinking at pubs and restaurants
The Queen appealing for volunteers to weed the garden of her Sandringham Estate
Matt Damon planning return trip to Ireland to travel around the country
QUIZ: Can you get full marks in this potentially very frustrating general knowledge quiz?
Man in his 60s killed following assault at home
The JOE Friday Pub Quiz: Week 248
You may also like
2 months ago
New Zealand government to consider proposals to ban smoking for people born after 2004
3 months ago
New Zealand to lift its one week Auckland lockdown on Sunday
4 months ago
Three-day lockdown imposed in Auckland due to presence of UK strain of Covid-19
4 months ago
New Zealand set to close its borders for the entirety of 2021
5 months ago
Crowds in Covid-free New Zealand welcome 2021 with giant public fireworks display
7 months ago
New Zealand votes to legalise euthanasia but not to legalise cannabis
Next Page