The Sunday Times has put together its annual list of the top schools around the country and for the fourth year running, Limerick's Coláiste Laurel Hill, a non fee-paying, all-girls secondary school, has been ranked number one in the Republic of Ireland.

The survey measures the progression of all second-level students over a three-year period to universities and institutes of technology.

END_OF_DOCUMENT_TOKEN_TO_BE_REPLACED

The list is 400-strong in total but there are some familiar faces near the top including Castleknock College in Dublin 15 which tops the North Dublin list for the fourth time in a row also.

Clongowes Wood in Co. Kildare is the best school in Leinster excluding Dublin while Scoil Mhuire in Cork is the second best school in Munster and in the whole of the country.

Salerno Jesus and Mary Secondary in Galway takes the prize in Connacht for the second year in a row and in Ulster, Colaiste Oiriall comes out on top after a brief one-year hiatus. They have topped the Ulster poll five times since 2010.

Here's the full list of the top 100 schools in the Republic of Ireland as revealed by The Sunday Times. 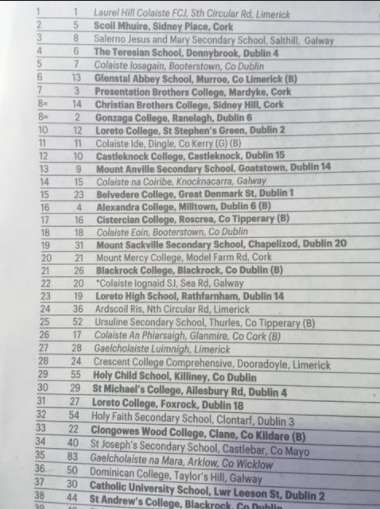 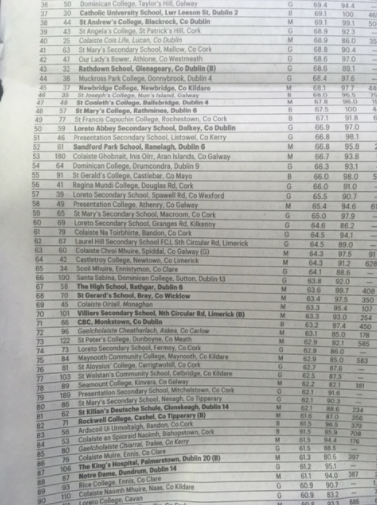 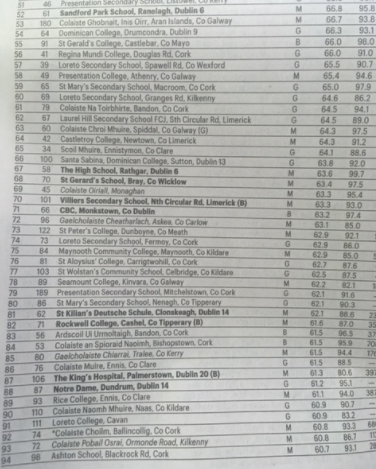 House of Rugby Ireland · Quinn Roux on finding a home in Ireland and Mike McCarthy brings the absolute HEAT!
popular
Holly Willoughby criticises influencer for travelling to Dubai during pandemic
Vials of Covid vaccine in Louth and Meath area dumped as they weren't stored properly
QUIZ: Can you name all of these countries just from one of their cities?
Here are the best movies on TV tonight
New Zealand set to close its borders for the entirety of 2021
Leo Varadkar says if Ireland introduced mandatory hotel quarantine, it would have to do so for a year
Five things we definitely do not want to see in the new Harry Potter TV series
You may also like
1 day ago
John Cooney comes to defence of JJ Hanrahan after kicking criticism
1 week ago
140,000 Covid vaccines to be administered by next Sunday
1 week ago
CMOs in Ireland and Northern Ireland release joint statement over worsening Covid-19 situation
3 weeks ago
Tuesday set to be "coldest night of winter" so far
1 month ago
James Lowe fires back over Chris Ashton's far too personal criticism
2 months ago
QUIZ: Can you identify these Irish towns on a map?
Next Page