More than 76 million vaccination doses have been administered across America.

Joe Biden has said that the United States will have enough vaccines for the whole country by the end of May.

This would be two months earlier than anticipated, as he announced that the drugmaker Merck would help produce Johnson & Johnson’s newly approved shot. 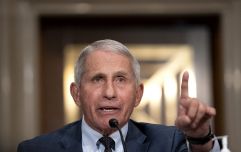 END_OF_DOCUMENT_TOKEN_TO_BE_REPLACED

Johnson & Johnson's vaccine, crucially, is a one shot vaccine. The European Medicines Agency is set to decide on whether it will be approved for use in Europe next week.

Biden urged all Americans to take the vaccine in a speech, where he said: "We’re now on track to have enough vaccine supply for every adult in America by the end of May."

When asked when "normal life" may resume in America, Biden said that he would be reluctant to put a set date on it, but that some point next year looks most likely.

He said: "I’ve been cautioned not to give an answer to that because we don’t know for sure."

This is believed to be due to delivery issues.

The Big Reviewski || JOE · The Big Reviewski with Ray Liotta, Goodfellas facts & Tom Hanks making us cry
popular
The JOE Movie Quiz: Week 121
The JOE Friday Pub Quiz: Week 262
Temperatures to plummet to five degrees with thunderstorms as Atlantic system to hit next week
Ireland's newest train station officially opens in Dublin
PICS: The man with the biggest penis in the world has one unbelievable problem with it
Jason Byrne forced to cancel tour dates due to a heart condition
The 50 most iconic songs of all time* have been revealed
You may also like
3 days ago
Retail billionaire calls on unvaccinated people to be banned from shopping centres
4 days ago
Llamas could play a role in treating Covid-19 in the future
5 days ago
Six out of 10 office workers still in the dark about future workplace plans
1 week ago
Pop-up Covid-19 vaccination centres to open on college campuses this month
1 week ago
NPHET gives green light to further easing of restrictions from Monday
1 week ago
Irish pubs and nightclubs could be given 6am closing time after 22 October reopening
Next Page