Investigation launched after bodies found in house in Tipperary

Gardaí are investigating "all circumstances" surrounding the discovery.

An investigation has been opened following the discovery of two bodies in a house in Tipperary on Monday, 20 June.

Shortly before 4pm, Gardaí entered the residence in Cloneen, where they found the bodies of two people – an elderly man and an elderly woman.

END_OF_DOCUMENT_TOKEN_TO_BE_REPLACED

A statement from An Garda Síochána notes that "all circumstances" are being investigated.

Early indications suggest that the bodies were in the house undiscovered for a period of time.

As of Monday evening, the scene remains preserved so that the Garda Technical Bureau may carry out a forensic examination.

The offices of the State Pathologist have been notified. 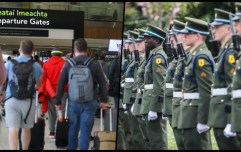 END_OF_DOCUMENT_TOKEN_TO_BE_REPLACED

According to RTÉ News, locals had raised concerns about the whereabouts of the man and woman.

It is understood that the deceased were a couple, both aged in their 70s. No cause of death has been established, nor has there been any indication of foul play.