An investigation has been opened.

One was sent to Bill and Hillary Clinton late on Tuesday, the other sent to Barack and Michelle Obama early this morning. It has been reported that both were handed as potentially explosive devices. 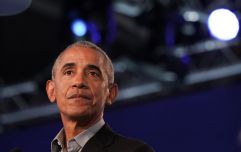 END_OF_DOCUMENT_TOKEN_TO_BE_REPLACED

The Secret Service has clarified that the intended recipients were never in any danger of receiving the packages.

This news follows reports that a bomb was also found on the property of prominent liberal activist and Democrat fundraiser George Soros.

A statement from the Secret Service confirms that a "full scope criminal investigation" has been launched, which will leverage all available federal, state, and local resources to determine the source of the packages and identify those responsible.

I just got a full @SecretService statement about 2 potential explosive devices sent to Hillary Clinton and also Barack Obama: pic.twitter.com/cHHynl6fIA

popular
The JOE Friday Pub Quiz: Week 307
Netflix has just added an incredibly tense 97-minute thriller
A great underseen action thriller is among the movies on TV tonight
Prime Video has just added 25 very big movies to its library
Thunderstorms and heavy rain to end Ireland's current heatwave
Record for hottest August day in Ireland ever has now been broken
The 50 most iconic songs of all time* have been revealed
You may also like
1 month ago
The Obamas are heading to Cork to film their first Netflix series
1 year ago
QUIZ: How well do you know Joe Biden, the new president of the United States
2 years ago
Irish author Sally Rooney features on Barack Obama's annual list of favourite books
2 years ago
WATCH: Barack Obama tears into "call-out culture"
3 years ago
Barack Obama blames Hillary Clinton for Trump's election, according to new book
3 years ago
Thousands sign petition to name the street at Trump Tower after Barack Obama
Next Page