Booster vaccine dose interval to be reduced to three months

"Boosters will continue to be offered in the priority order previously recommended."

Minister for Health Stephen Donnelly has announced that the gap between the initial schedule of Covid-19 vaccination and a subsequent booster dose will be reduced to three months.

Donnelly is set to introduce the change following recommendations from the National Immunisation Advisory Committee (NIAC).

END_OF_DOCUMENT_TOKEN_TO_BE_REPLACED

More than 1.2 million booster doses have been administered so far throughout the country amidst scenes of large queues that have resulted in vaccination centres quickly hitting full capacity, forcing people to be turned away.

Over the weekend, former Health Minister Simon Harris added his voice to a growing chorus calling for acceleration when it comes to implementing the booster shot.

"Yes, we should boost the booster campaign, and everything that can be possibly done to achieve that will be done," he said while in conversation on RTÉ's The Week in Politics programme on Sunday afternoon.

"We're on target to have 1.5 million people receive their booster by Christmas, and this week we'll see an updated roadmap on boosters published by the Department of Health," Harris added.

END_OF_DOCUMENT_TOKEN_TO_BE_REPLACED

On Monday night (13 December), his successor moved to speed things up.

"I have this evening accepted a recommendation from NIAC that the gap between completion of primary schedule of COVID-19 vaccination and a booster dose will be reduced to three months," said Donnelly.

"Boosters will continue to be offered in the priority order previously recommended."

On Monday night, the Department of Health confirmed 4,688 new cases of Covid-19 in Ireland. 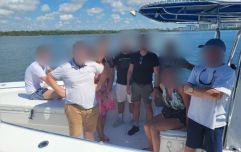 END_OF_DOCUMENT_TOKEN_TO_BE_REPLACED

518 patients are currently in hospital in relation to Covid, of which 108 are in ICU.

📢 I have this evening accepted a recommendation from NIAC that the gap between completion of primary schedule of COVID-19 vaccination and a booster dose will be reduced to three months. Boosters will continue to be offered in the priority order previously recommended. pic.twitter.com/W394WqjG74

Meanwhile, Government Chief Whip Jack Chambers said that he doesn't anticipate any further Covid-related restrictions to be put in place in Ireland before Christmas.

Speaking on RTÉ Radio 1's Today with Claire Byrne on, Chambers said he does not foresee any further constraints on top of those already in place.

He also said school closures are not on the cards, with the additional funding being made available to schools standing as proof of that.

"I don't believe [there will be more restrictions]. We've seen a stabilisation despite our case numbers being quite high," he said.

"We all need to be additionally wary of our extra contacts as we go through December."

popular
Infant dies after being hit by jeep in Roscommon
The JOE Friday Pub Quiz: Week 308
Pilots fly over destination airport at 37,000 feet because they were both sleeping
Two Irish people arrested in "smuggling event" near Miami
Netflix has just added 23 very big movies to its library
Multiple fatalities after planes collide mid-air over California airport
One of 2022’s best hidden-gem comedy series is available to stream
You may also like
1 day ago
Robert Troy apologises and submits seven amendments to correct the record
1 day ago
Gardaí warn public of increased incidents of drink spiking in clubs and nightclubs
1 day ago
Arrest made after shop robbed at knifepoint in Dublin
1 day ago
Deer spotted on road between M11 and M50 as drivers urged to take care
1 day ago
Man arrested on suspicion of the murder of Irish man in London
1 day ago
Galway City Council street cleaners claim Lotto jackpot worth over €5.5 million
Next Page