A paperwork error has resulted in a flight that was supposed to be bound for Düsseldorf (Germany) accidentally landing in Edinburgh (not Germany).

The Scotsman reported on Monday afternoon that passengers originally believed that the "Welcome to Edinburgh" announcement on the PA system was a joke.

The flight originally took off from London City Airport at 7:30am this morning and had been scheduled to arrive in Germany two hours later. Instead, it landed in the Scottish capital.

It has since been clarified that it was not a pilot error, and that misfiled paperwork resulted in the pilot and crew believing they were set to fly to Edinburgh.

A statement issued by the airline reads: "We are working with WDL Aviation, who operated this flight on behalf of British Airways, to establish why the incorrect flight plan was filed. We have apologised to customers for this interruption to their journey and will be contacting them all individually."

Some passengers have taken to their social media accounts to report on the diversion.

I have fallen asleep, missed my stop and woken up at the end of the district line before. This morning I never expected to wake up from my Dusseldorf bound flight...in Edinburgh! @British_Airways #BritishAirways #BA3271 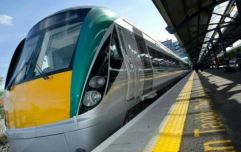 END_OF_DOCUMENT_TOKEN_TO_BE_REPLACED

The airport has put the blame on WDL Aviation, which is based in Cologne, Germany.

They wrote: "As pleasant as Edinburgh is this time of year, we’re sorry that passengers travelling to Dusseldorf on BA3271, operated by WDL Aviation, initially landed in the Scottish capital, rather than their intended destination. This was due to an incorrect flight plan submitted by WDL."


popular
Met Éireann issues status yellow rainfall warning for nine counties
QUIZ: How well do you know these famous Ted Hastings quotes from Line of Duty?
Lark Voorhies is not too pleased about being snubbed from the Saved by the Bell reboot
Two Irish citizens have tested positive for the coronavirus
BBC will show an 'immensely powerful' documentary about The Troubles tonight
QUIZ: How well do you know the Matrix series?
History to be required Junior Cycle subject from September
You may also like
4 days ago
CEO of biggest airline in the world weighs in on the reclining-your-seat debate
1 month ago
First year-round direct Ireland to Egypt service launches this summer
1 month ago
PICS: Stena Line are launching a new ferry and it looks pretty impressive
2 months ago
Several Aer Lingus and Ryanair flights cancelled due to strike action in France
2 months ago
Irish Rail announce late-night Christmas services for DART and commuter lines
3 months ago
The best Christmas markets in the world for 2019 have been named
Next Page