Can anyone spot what’s wrong with this tattoo that Cathal Pendred’s best mate got in honour of his UFC debut?

We’re no experts in Roman numerals but…

Cathal Pendred is still basking in the glory of his brilliant ‘fight of the night’ victory at UFC Dublin last Saturday night and the significance of the victory has not been lost on those close to the Dubliner.

Pendred revealed on Twitter today that his best mate fulfilled a promise that he would get a tattoo with Pendred’s name and the date of his UFC debut, but you might spot a small mistake in the picture below…

A few years ago my best mate said he would get a tattoo of my name & the date of my UFC debut when it happened... pic.twitter.com/05aSHFUSol 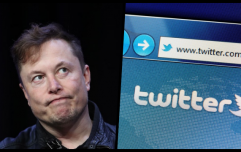 END_OF_DOCUMENT_TOKEN_TO_BE_REPLACED

Like we said, we’re no experts, but we’re pretty sure that the date in the tattoo reads 19/7/34, which would suggest that Pendred made his UFC debut back in biblical times when we’re pretty sure there was lots of fighting but none of it taking place in an Octagon. MMXIV is what he was looking for... we think.

It’s still a lovely gesture by Pendred’s mate in fairness and if he’s getting something similar done in future, we suggest that he refer to The Simpsons, where Bart showed a foolproof method of calculating Roman numerals when working out that Rocky V + Rocky II = Rocky VII, Adrian’s Revenge.

Hat-tip to Andy for the heads up on this one

popular
Jeffrey Dahmer’s dad thinks he knows what’s to blame for son becoming a serial killer
Two new 24-hour bus services are coming to Dublin
QUIZ: Test your knowledge with this Ultimate Friends Character Quiz
Why Bran Stark is the true villain of Game of Thrones
People think they've figured out the ranking of the viewers on your Instagram Stories
Amazon Prime Video has just added 20 very big movies to its library
House Of The Dragon is already better than Game Of Thrones
You may also like
2 weeks ago
How Twitter is changing gaming as we know it
2 months ago
Twitter officially sue Elon Musk to force him into buying the platform
2 months ago
Elon Musk says he is "terminating" his Twitter takeover deal
4 months ago
Elon Musk accused of sexual misconduct involving flight attendant on private jet
4 months ago
Elon Musk's $44 billion acquisition of Twitter on hold due to fake accounts
4 months ago
"Incredible and dangerous narcissism" – Michael D. Higgins slams Elon Musk's purchase of Twitter
Next Page