The individuals involved have been asked to apologise.

The depiction of a deceased Carlow man being brought to a post office during a Saint Patrick's Day parade last week has been described as "totally unacceptable" by local natives.

Images from the parade circulated widely on social media across the weekend.

Walter Lacey, a former Carlow County Councillor, spoke about the upset caused by the depictions on Lunchtime Live on Newstalk on Monday (21 March). 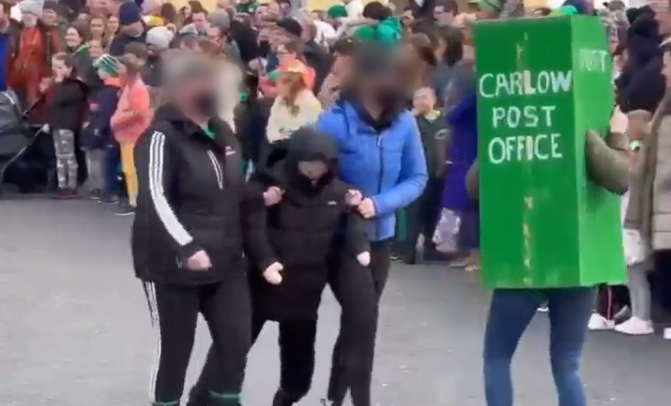 END_OF_DOCUMENT_TOKEN_TO_BE_REPLACED

In January, Peadar Doyle was brought to a post office in Carlow town by two men looking to collect his pension, until it was discovered that Doyle was actually deceased.

A man has since been charged in connection with the incident, and a court case is ongoing.

END_OF_DOCUMENT_TOKEN_TO_BE_REPLACED

"I was extremely disappointed when it was brought to my attention that two parades and possibly more in Belmullet County Mayo and Kilfenora in County Clare made a complete mockery of a local Carlow man here, Peadar Doyle, who passed away in January," Lacey said.

"There were strange circumstances in relation to his passing, and they imitated that and thought it was a very funny thing that they would do, but it was so offensive, so hurtful and so thoughtless.

Lacey went on to describe how well respected Peadar Doyle was in Carlow, saying that there would be very few people "who would have a bad word to say about Peadar".

END_OF_DOCUMENT_TOKEN_TO_BE_REPLACED

The former councillor said that he had reached out to organisers of both parades in Belmullet and Kilfenora via Facebook's Messenger service, but was yet to receive acknowledgement or an apology from the representatives.

Lacey is calling on the organisers to apologise to the family for any upset caused by the depiction.

popular
Kirstie Alley: Cheers star dies aged 71
Amazon Prime Video has just added 38 very big movies to its library
The Banshees Of Inisherin is arriving on Disney+ sooner than you might expect
Mia Khalifa claims seaside town is better than Miami
Woman hit by rollercoaster is trapped in own body after finally awaking from coma
Simpsons writer has explanation for the show being able to predict so many major events
5 must-watch shows and movies streaming on NOW in December
You may also like
49 minutes ago
5 must-watch shows and movies streaming on NOW in December
1 hour ago
Kirstie Alley: Cheers star dies aged 71
16 hours ago
Teens tried to steal judge's motorbike from court despite guards, gates and CCTV
17 hours ago
Blonde director defends film from claims it exploited Marilyn Monroe
17 hours ago
Dissection of a woman's body to be shown on Channel 4 tonight in TV first
18 hours ago
Love Island 2023 details revealed ahead of January return
Next Page