CervicalCheck campaigner Ruth Morrissey, who successfully sued the HSE over the scandal, has died. She was 39.

Morrissey had been suffering from terminal cancer as she fought the case in court, and was awarded damages of €2.1 million from the HSE and two laboratories, Medlab and Quest. A 2014 review had shown that smear test screenings carried out in 2009 and 2012 had both been read incorrectly by the two labs in question. 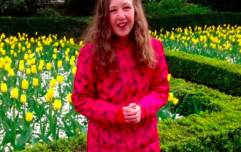 END_OF_DOCUMENT_TOKEN_TO_BE_REPLACED

However, Ms. Morrissey wasn't made aware of the mistake until 2018, the same year that her cancer returned. At least 221 women were affected by similar misreadings.

Paying tribute to the late Morrissey on Twitter, her fellow prominent CervicalCheck campaigner Vicky Phelan wrote: "Ruth was one of the strongest women I know, and also one of the most positive. I never once saw her without a smile on her face and I saw her when she was very ill.

"My thoughts today are with Ruth's husband, Paul and their beautiful daughter, Libby who Ruth adored." Phelan also confirmed that Morrissey died peacefully at Milford Hospice.

popular
Dominic Cummings reveals "texts from Boris" calling Matt Hancock "f**king hopeless"
Public warning issued as large male boar is on the loose in Kerry
Piers Morgan hits out at Ikea as it becomes latest brand to pull advertising on GB News
Ryanair takes delivery of its first "Gamechanger" aircraft
Warning issued over nationwide 087 phone scam where callers pretend to be Gardaí
The 50 most iconic songs of all time* have been revealed
Electric Picnic organisers announce new dates for summer festival
You may also like
7 hours ago
Skeletal remains found in Cork identified as man reported missing in 2004
1 day ago
Teenager arrested after pointing gun at woman and pulling trigger during attempted robbery in Drogheda
1 day ago
Search continues for missing Dublin man in Wyoming mountains
3 days ago
Failure by Gardaí to respond to domestic violence calls "of deep concern", says Women's Aid
4 days ago
Denmark's Christian Eriksen collapses on pitch during Euro 2020 game
4 days ago
Two-time cancer survivor Chris Proby explains the importance of giving blood
Next Page