Holohan also said he is worried about "anticipatory behaviour" as the country begins to reopen today.

Chief Medical Officer (CMO) Doctor Tony Holohan has given a hopeful update on the possibility of a return to festivals such as Electric Picnic this summer.

Speaking with Bryan Dobson on RTÉ News at One on Monday, Dr Holohan said that while it would depend on the success of the vaccination rollout programme, he would "really like" to see a return to live events throughout the country over the coming months.

END_OF_DOCUMENT_TOKEN_TO_BE_REPLACED

Dr Holohan added that if case numbers remain stable and the next stage of reopening the country on 7 June goes according to plan, the Government will be able to "express ambition" for more sectors to reopen.

However, he said it would "require us all" to adhere strictly to public health advice and guidelines.

When asked about the possibility of large outdoor or indoor live events and concerts, he said: "Well we certainly have the ambition that we can see those things return when we think it's safe."

Asked if this meant that there was a possibility of seeing spectators at the All Ireland Final in Croke Park in July, he said: "I'd really like to think so."

Dr Holohan also said that he wouldn't "make a prediction" yet for the return of festivals such as Electric Picnic in September.

However, he added that if the country is where it needs to be in terms of the management of both vaccines and variants, "it will be something we can think about".

The CMO also said he was worried about an increase in "anticipatory behaviour" as restrictions across the country begin to ease from today. 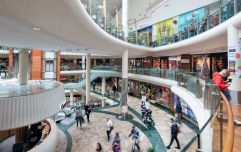 END_OF_DOCUMENT_TOKEN_TO_BE_REPLACED

Dr Holohan said that he is concerned that when people see "things starting to get better" they will undertake activities that aren't safe yet, such as parties and indoor gatherings.

Tourism minister Catherine Martin said last week that Ireland will pilot sporting matches and concerts in the coming months as part of the new re-opening plan, for large-scale test events.

While the minister did not give a timeline for when these events will take place, she did confirm that they will be allowed both "indoors and outdoors".

Martin said on Thursday that she was happy to be able to give a "hopeful signal" for the summer after the Cabinet agreed to pilot the events in a move mirroring a number of other European countries.

"This is a positive signal to the events industry whose doors have remained closed for so long, that we are planning to reopen you again in a safe way. I hope this is a positive, hopeful signal for summer to come."