Ok, Coca-Cola will have us believe that holidays are coming and given the fact that they practically invented Santa as we know him - jolly old Saint Nick wore green before Coke rebranded him, true story - we'll take their word on it.

Granted, the arrival of the holidays is always a very subjective matter.

For some people, it's Christmas as soon as Halloween passes. For others, it's not the festive season until the first day of December. Elsewhere, traditionalists - like yours truly - will argue that the Christmas tree only goes up on 8 December, the Feast of the Immaculate Conception.

Each to their own.

However, with the influx of Christmas adverts, there's always one that trumps the rest and heralds in the start of the season. Well, that's true in jingle terms because that 'Holidays Are Coming' jingle is a banger!

Snow, lights, lots of smiles, Santa, a massive conglomerate that are marketing itself in-situ with the happiest time of the year.

Yep, it could only mean the arrival of the beloved Coca-Cola Christmas trucks in Ireland. 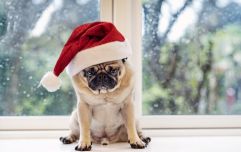 END_OF_DOCUMENT_TOKEN_TO_BE_REPLACED

Aside from seeing the beloved trucks, guests will be able to purchase exclusive merchandise at each truck stop and will also get to enjoy a can of Coca-Cola Zero Sugar, Diet Coke, or Coca-Cola Original Taste too. We're shocked at this news.

Yep, the Coca-Cola truck is here and it's stopping at the following locations around Ireland:


popular
Gardaí arrest woman (40s) in relation to the three children that were found dead in Dublin
Tommy Tiernan's chat with James Leonard about addiction and recovery is genuinely life-changing
The JOE Movie Quiz: Week 38
QUIZ: Name the missing word from these famous Dumb and Dumber quotes
Matthew McConaughey and True Detective creator will re-team on a new murder mystery
The first look at the new season of Better Call Saul edges us ever closer to the Breaking Bad era
QUIZ: Name the missing word from these famous Derry Girls quotes
You may also like
3 weeks ago
Irish people have spent a lot of money on food and drink over the festive season
1 month ago
The 10 best new TV shows from 2019 you really should be watching
1 month ago
This Christmas, give Bountys the respect that they deserve
1 month ago
QUIZ: Can you guess the Roses chocolates without their wrappers?
1 month ago
Kevin Spacey has posted another bizarre Christmas video
1 month ago
The Muppet Christmas Carol is proof that Muppets are better than humans
Next Page