Conor McGregor has found himself in hot water after the fighter shared a picture of his mum wearing 'black face' at Halloween.

The UFC star, 34, shared his mum's controversial outfit on Instagram as part of a Halloween montage. Yet, it was his mother's choice that sent people into a frenzy - and not the good kind.

While the fighter wore a pilot's suit with a matching hat, she wore offensive dark face paint and a red dress.

His mum going full on ‘blackface’ however, I like that less.

The dress itself featured a piece of animal print cloth across the front and bones along the neckline.

END_OF_DOCUMENT_TOKEN_TO_BE_REPLACED

While the pictures of the fighter's mum went unnoticed by some social media users as they weren't first up in the montage, those who did see them were shocked. 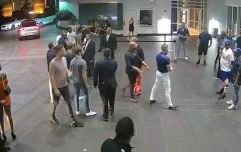 END_OF_DOCUMENT_TOKEN_TO_BE_REPLACED

One Instagram user wrote: "Conor's mum bro... has nobody noticed?"

"Is that... blackface? What is going on with that?" questioned another, while the fifth added: "Who went in blackface ffs?"

Another questioned how someone could possibly think this was an acceptable Halloween costume in 2022.

They wrote: "Come on bruh we still doing blackface in 2022?"

Black face is not cool during Halloween - or any time of the year - as historically it has been used as a form of entertainment used to dehumanise people of African descent.

The post shows McGregor all dressed up for a night of trick or treating with his wife Dee Devlin and children Conor Jr, Croía and Rían.

McGregor is in a matching costume with his wife as pilots, and his children are dressed as a terrifying razor-toothed Huggy Wuggy bear, adorable fluffy lion and cute light-up fairy.

popular
Conor Mcgregor hit by car ‘at full speed’ while cycling
Colin Farrell shouldn't win the Oscar this year
Parents left in shock after gorillas start mating in front of kids at zoo
Netflix has just added one of the best sci-fi movies of recent years
S Club 7's Hannah Spearritt and children left homeless after being forced from home before Christmas
New Netflix series deserves to be as big as Stranger Things
Forspoken breaks the golden rule of gaming... and not in a good way
You may also like
1 day ago
Conor Mcgregor hit by car ‘at full speed’ while cycling
5 months ago
Conor McGregor to make film acting debut in Road House remake
1 year ago
WATCH: Conor McGregor and Machine Gun Kelly face off at MTV VMAs
2 years ago
Jake Paul calls out Conor McGregor in nasty video
2 years ago
Conor McGregor responds to Paschal Donohoe’s calls to encourage social distancing amongst Irish public
3 years ago
Timing of Conor McGregor announcement is no coincidence
Next Page