It is said to be "too strict".

A controversial dress code implemented in some Community Primary Schools is under review after it was published to the public last week.

According to RTÉ News, Dublin and Dún Laoghaire Education and Training Board withdrew the code earlier this week after details of the restrictions appeared online; the board says the code is being reviewed. 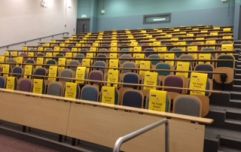 END_OF_DOCUMENT_TOKEN_TO_BE_REPLACED

Some of the details in the code included not wearing a skirt above knee length and not dying your hair an unnatural colour... even some 'shades of red' were banned.

Wearing jeans, runners, hoodies and t-shirts to work was also not permitted.

The rules were described as "intrusive and oppressive" by a senior education figure.

Community National Schools are the newest model of primary school, and there are currently 11 in the country.

House of Rugby Ireland · Quinn Roux on finding a home in Ireland and Mike McCarthy brings the absolute HEAT!
popular
The JOE Movie Quiz: Week 86
Majority of English people 'pleased' or 'not bothered' by prospect of united Ireland
The JOE Movie Quiz: Week 85
Ireland adores Leitrim hurler Zak Moradi on Tommy Tiernan show
QUIZ: The JOE Music Quiz: Week 41
Gardaí uncover functioning shebeen in Swords
The JOE Friday Pub Quiz: Week 227
You may also like
5 months ago
Back to school Covid-19 advice published by government
5 months ago
Facemasks on buses and changes to exams: Government announces school reopening roadmap
7 months ago
Education Minister: “Hard to see all students being back in September" with two metre rule in place
8 months ago
ASTI advises members to hold off working on predicted grades for Leaving Cert students
9 months ago
Leaving Cert exams suspended until late July/early August, Junior Cert exams cancelled
10 months ago
Cancelling oral and practical exams the fairest decision for the most students
Next Page