He's the Oskar Schindler of the cattle world.

A farmer in County Cork is to send his dairy herd to an animal sanctuary in the United Kingdom rather than see the cattle slaughtered.

Hillside Animal Sanctuary will now take the cattle, who will live out their lives naturally rather than being butchered. It is the first dairy herd to leave a farmyard in Ireland to retire to a sanctuary.

Musician Sharon Shannon recently visited the farmer - who wishes to remain anonymous - after she learned of his ‘noble and admirable decision’.

She pointed out that, "these beautiful animals will now go to a sanctuary instead of being sold for slaughter or becoming victims of live export. This is an awakening example of how compassion and kindness has won over in a world full of greed."

A GoFundMe page has been set up to transport and provide health checks for more herds to travel to sanctuary in the UK. 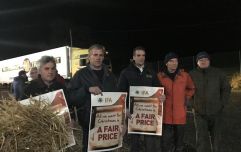 END_OF_DOCUMENT_TOKEN_TO_BE_REPLACED

"How could I send them to slaughter when there is this option for them?" asked the farmer.

"After all these years, they deserve more from me and they are very bonded as a herd. I can retire with peace of mind now, knowing they will live out their days together."


popular
Met Éireann says there's a risk of snow for parts of Ireland this weekend
QUIZ: Can you guess the pixellated movie posters?
QUIZ: Can you name all these European countries just from their vowels?
Teenager arrested in relation to death of Cameron Blair at a house in Cork
Aldi to recruit 550 new staff and implement living wage rate for employees
Here are Ireland’s favourite takeaways, as per the National Takeaway Awards
You may also like
1 month ago
Irish Farmers’ Association stage blockade at Aldi distribution centre over beef prices
1 month ago
A Russian farm is giving VR headsets to dairy cows to "reduce anxiety"
2 months ago
The Irish Farming Calendar for 2020 is here and it's really quite something
4 months ago
Over 350 people temporarily laid off at meat-processing plant in Tipperary
7 months ago
Farmer in mid-60s fatally injured by animal in farm accident in Longford
8 months ago
ISPCA “horrified and angered” by footage of Irish dairy calves being kicked and stamped on in France
Next Page