It's believed the sinkhole is linked to the collapse of a mine shaft.

Cork County Council have urged caution to anyone driving in the area that's south of Allihies Village on the Beara Peninsula because a large sinkhole has developed on the public road L-8912-0.

Since the sinkhole emerged, the road has been closed to the public.

Newspaper advertisements notifying the public about this emergency closure will also be published.

As posted on their official Facebook page, Cork County Council believe that the sinkhole is linked to the collapse of a mine shaft in Cahermeeleboe, Allihies.

The post states: "While the road has been closed and barriers have been erected to prevent access to the area, there is the potential that this hole will become further enlarged (given the unknown ground conditions here), and therefore Cork County Council urges vigilance and advises that caution should be exercised by all in this area.

It adds: "Cork County Council is monitoring the situation and staff are currently endeavouring to ascertain contact information for the owners of the mine. Separately, Cork County Council has asked the Exploration and Mining Division of the Department of Communications, Climate Action and Environment to undertake a survey of the area as a matter of urgency, to determine the extent of the undermining and the potential risk of further collapses in this area." 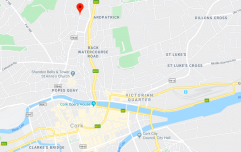 END_OF_DOCUMENT_TOKEN_TO_BE_REPLACED

Members of the public have been asked not to go near the sinkhole, or to move beyond the safety barriers.

For those affected, keep an eye on the official page of Cork County Council as further information will be issued as the situation develops.

Here's a look at the size of the sinkhole.


popular
QUIZ: How well do you know Will Smith's movie career?
The JOE Friday Pub Quiz: Week 174
Met Éireann issue low temperature weather warning for 25 counties
More bad news for gamers as another two of 2020's biggest games get pushed back
Boozy holidays in the Balearic Islands will change as new laws crack down on alcohol-fuelled trips
Temperatures drop to -4 as weather warning is in place for 17 counties
QUIZ: How many of these Disney Channel TV shows can you name?
You may also like
22 hours ago
Proposed Cork to Limerick motorway "makes no sense" says Eamon Ryan
1 day ago
A man in his 20s has died following a stabbing in Cork city
1 week ago
PICS: €300,000 of cannabis herb seized in Cork
1 week ago
Visitor ban imposed at Cork hospital after spike in flu cases
2 weeks ago
Bus driver arrested after failing roadside breath test in Cork
2 weeks ago
A victim has been identified following the discovery of the body of a man in Cork
Next Page