Gardaí are renewing their appeal following a serious assault in Cork

The incident, which left a woman in hospital, occurred last week.

Gardaí are renewing their appeal for witnesses in relation to a serious assault that occurred in the north of Cork North on Tuesday 15 September.

On Tuesday evening a woman, aged in her 20s, was walking between Buttevant and Liscarroll when the driver of a car stopped and spoke to her. 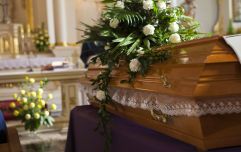 END_OF_DOCUMENT_TOKEN_TO_BE_REPLACED

The driver proceed to assault the woman, and then left then scene.

The woman was brought to Cork University Hospital and has since been discharged.

Gardaí are appealing for anyone who was traveling the R522 Buttevant to Liscarroll Road between 6.30pm and 9pm, particular road users with dash cam footage, to contact Mallow Garda Station on 022-31450, The Garda Confidential Line on 1800-666-111 or any Garda Station.

popular
Aldi to limit number of Christmas toys customers can purchase
QUIZ: Identify these movies from the 2000s from a single image
Number of people who can attend funerals under Level 5 restrictions to increase to 25
A mute button will be used in the next presidential debate
House of Rugby Ireland is back with a fresh look, and new hosts
Road users urged to avoid Cork city centre due to “serious flooding”
Jeff Bridges has been diagnosed with Lymphoma
You may also like
2 hours ago
Funeral director says having 10 people at funerals will be "very painful"
2 hours ago
Road users urged to avoid Cork city centre due to “serious flooding”
4 hours ago
Public health expert details how Covid-19 can be supressed over the next few weeks
15 hours ago
Micheál Martin announces move to Level 5 restrictions nationwide for six weeks
18 hours ago
1,031 new cases of Covid-19 confirmed in Ireland, no new deaths
18 hours ago
What the government's Living With Covid Plan says about Level 5
Next Page