REVEALED: The counties where it’s most and least expensive to rent as prices skyrocket (again)

Rents in Dublin are now almost €380 a month higher than the previous peak at the height of the Celtic Tiger.

The cost of renting in Ireland rose by an average of just over 10% by the end of December 2017, the seventh quarter in a row that a new all-time high has been set, according to the latest rental price report by Daft.ie. 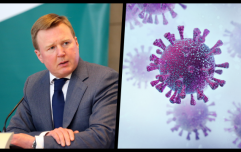 END_OF_DOCUMENT_TOKEN_TO_BE_REPLACED

As far as Ireland’s other major cities are concerned, rents in Galway and Waterford rose by a little over 12% during the year, rents in Limerick rose by 14.8% and in Cork, the increase in rents was 7.7%.

Outside the five main cities, meanwhile, rents rose by 9.8%.

Dublin was obviously the most expensive county for rental prices (you can see the average cost of rent for the respective areas of the capital below), followed by Wicklow (€1,256 per month), Kildare (€1,212 per month) and Meath (€1,171 per month). 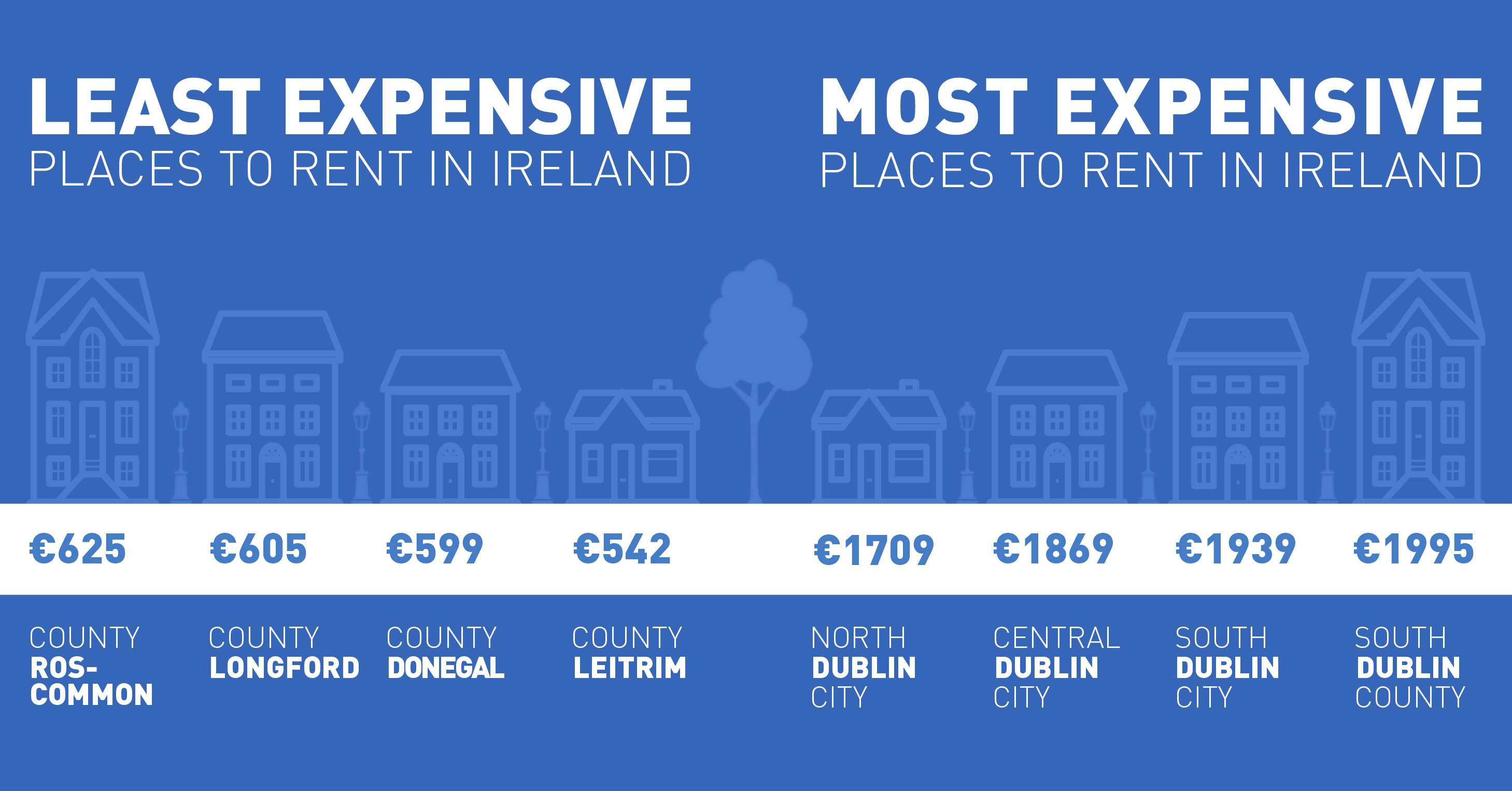 The figures are based on asking rents for properties advertised to let on Daft.ie and you can see the average price of rent in your county along with a price comparison with the 2016 figure on the map below. 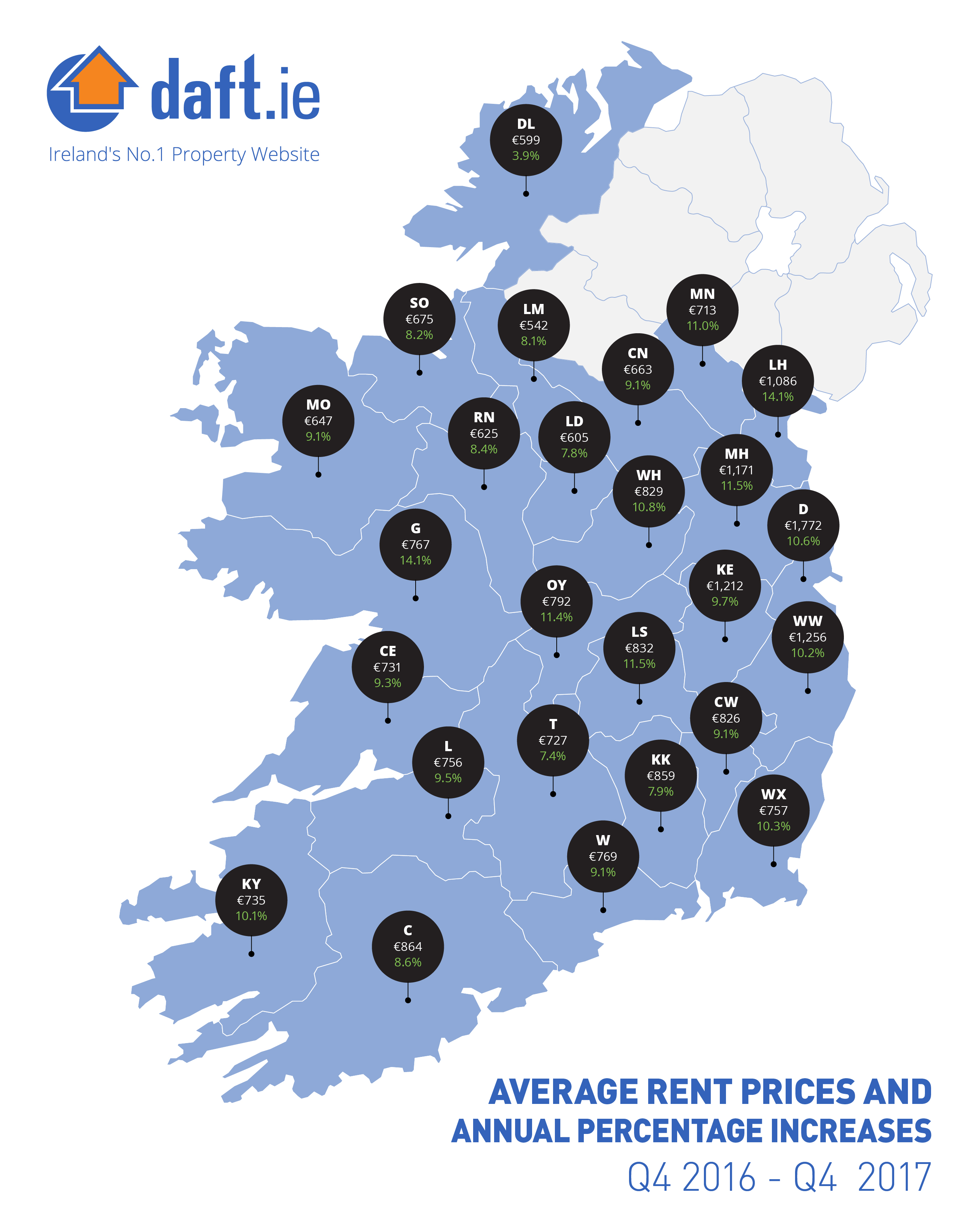 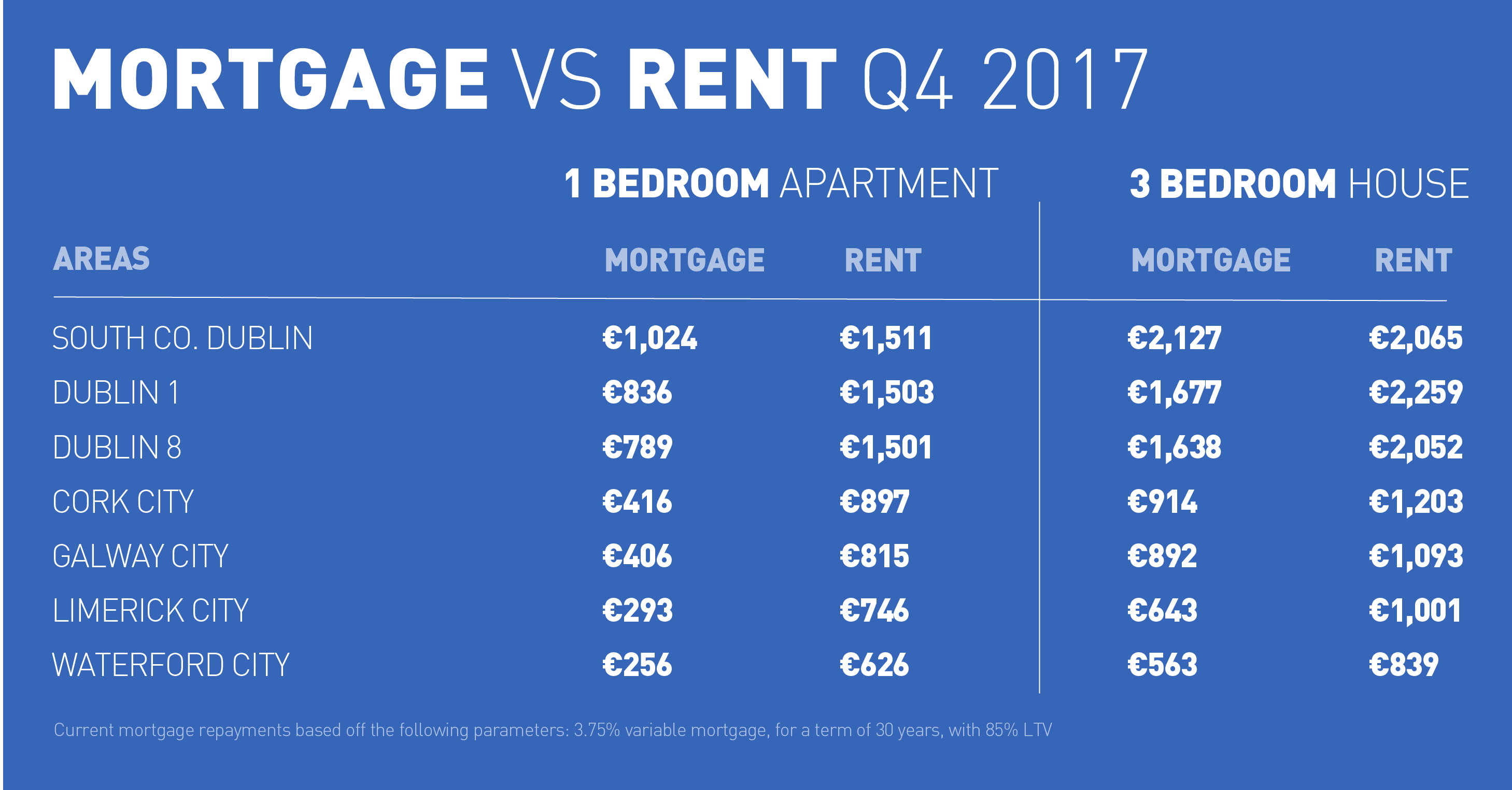 END_OF_DOCUMENT_TOKEN_TO_BE_REPLACED

The report also reveals that there were 3,143 properties available to rent nationwide on 1 February, the lowest number ever recorded for this time of year since the series started in 2006 and a 15% decrease on the same date a year previously.

Commenting on the report, Ronan Lyons, economist at Trinity College Dublin and author of the Daft Report, said: “2017 marks the fourth consecutive year of double-digit gains in rents nationwide. The underlying pressure for rising rents remains due to a chronic shortage of available rental accommodation, at a time of strong demand. In some segments in Dublin, rents have now doubled since 2010.

END_OF_DOCUMENT_TOKEN_TO_BE_REPLACED

“Rents have been rising in the capital twice as long as they fell – and indeed twice as long as the last market upswing. With at least 40,000 new homes a year needed to meet underlying demand, but with below 20,000 homes built in 2017, it remains the priority for policymakers to bring construction costs down in line with affordable levels.”

popular
The 50 most iconic songs of all time* have been revealed
Amazon Prime Video has quietly added 10 big new movies to its library
Clint Eastwood's final western is among the movies on TV tonight
The JOE Movie Quiz: Week 130
The best memes from this year's Late Late Toy Show
The Toy Show DJ brothers have been offered their very first gig
QUIZ: Name the films referenced by The Simpsons
You may also like
17 hours ago
Travel from Ireland to UK unaffected by new Covid measures to tackle Omicron
1 day ago
PCR tests to be required for all international arrivals to the UK
1 day ago
Is comhartha é tvuít Ryanair faoi "comharthaíocht suáilce" don dearcadh atá ag an tír faoin teanga
2 days ago
Public advised to avoid non-essential travel to seven southern African countries over Covid variant concern
2 days ago
Man dies in Antrim after car hit by falling tree during Storm Arwen
2 days ago
"This is a pandemic of the unvaccinated," says Leo Varadkar
Next Page