VIDEO: Danny Healy-Rae's unique views on climate change has got a lot of people talking

“God above is in charge of the weather and we here can’t do anything about it.”

Danny Healy-Rae, the Independent TD from Kerry who was elected to the Dáil for the first time at the General Election, has some very interesting views on climate change.

As reported by The Irish Times, one half of the Healy-Rae elected representatives said during a Dáil debate on climate change that, "God above is in charge of the weather and we here can’t do anything about it".

The moment occurs here, around the 2:45 mark. 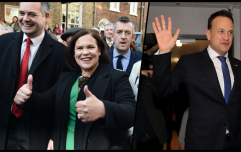 Sinn Féin takes 10% lead on Fine Gael amid controversies, according to latest poll

END_OF_DOCUMENT_TOKEN_TO_BE_REPLACED

Citing one year during the 19th century, "when the sun didn't shine at all" before any sign of combustible engines, Healy-Rae had some choice words for the current carbon tax, questioning where the money is actually going.

Claiming that the tax is providing too much of financial burden on society, the Kilgarvan native said:

What do people think of Healy-Rae's views here?

The Big Reviewski || JOE · The Big Reviewski with Y: The Last Man, that Malignant ending & a secret streaming service
popular
The JOE Friday Pub Quiz: Week 261
Copper Face Jacks sets reopening date after being closed for 18 months
"Variable speed limits" to be introduced on the M50 in the coming weeks
The 50 most iconic songs of all time* have been revealed
Employers cannot ask staff to reveal their vaccination status, confirms Government
A brilliant Irish psychological thriller and 5 more movies and shows to watch this week
Miriam O'Callaghan had no patience for Stephen Donnelly's "gibberish" on Prime Time
You may also like
1 week ago
Micheál Martin could be in a bit of bother next week
2 weeks ago
Leo Varadkar apologises for text message controversy, says he was on annual leave and wasn't contacted
1 month ago
Women's Council call for stalking legislation as threats against female politicians "becoming common"
1 month ago
Finance Minister Paschal Donohoe was invited to Katherine Zappone's Merrion Hotel event
1 month ago
Fine Gael Senator says guidelines were breached but the law wasn't broken at Merrion Gate
1 month ago
Leo Varadkar’s comments about “naming and shaming” employers show he's living in a fantasy land
Next Page