The veteran broadcaster spoke passionately at a UK parliamentary committee on Tuesday.

David Attenborough has urged British MPs to focus on climate emergency, arguing that no action should be considered too radical in terms of approach

Attenborough, who addressed thousands with a rousing speech about the environment at Glastonbury two weekends back, spoke at a UK parliamentary committee on Tuesday, where he contended that the public will one day look back on climate change with the same horror reserved for slavery.

“We cannot be radical enough in dealing with the issue that faces us at the moment," the broadcaster and natural historian said.

"The question is what is practically possible, how can we take the electorate with us in dealing with these things?

"The most encouraging thing that I see, of course, is that the electors of tomorrow are already making themselves and their voices very, very clear."

The 93-year-old noted that this aspect offered some degree of comfort, but emphasised that this is strong evidence that young people understand urgent problems facing their future.

"[It is] also justification and reality that these people, young people, now are recognising their world is the future. 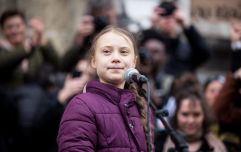 END_OF_DOCUMENT_TOKEN_TO_BE_REPLACED

"I'm okay, you know, for the next decade, and all of us here are okay because we won't face the problems that are coming.

"The problems in the next 20 or 30 years are really major problems that are going to cause great social unrest and great changes in the way that we live, in what we eat and how we live and so on. It's going to happen."

Responding to a request by Labour MP Vernon Coaker to elaborate on a categorical shift in public attitudes, Attenborough looked to the past.

“There was a time in the 19th century when it was perfectly acceptable for civilised human beings to think that it was morally acceptable to actually own another human being for a slave," he said.

"Somehow or other, in the space of 20 or 30 years, the public perception of that totally transformed.

"I suspect that we are right now in the beginning of a big change," he added.

"Young people in particular are the stimulus that’s bringing it about."


popular
Gardaí to be given power to enforce social distancing regulations
QUIZ: Can you name all of these characters from Love/Hate?
Modelling suggests Ireland may have already hit its peak for Covid-19 deaths
WATCH: Paul O’Connell provides the single greatest moment in the history of A Question of Sport
There's a "Super Pink Moon" tonight, the biggest and brightest moon of 2020
The ultimate UK Office quiz - Season 1
The 50 most iconic songs of all time* have been revealed
You may also like
1 month ago
World's richest man commits $10 billion to help fight climate change
2 months ago
David Attenborough says 'the moment of crisis has come' in relation to climate change
3 months ago
World's oceans losing oxygen at alarming rate, says study
4 months ago
"They have embarrassed this country on an international level." Teenagers criticise Government on climate change
4 months ago
Our guide to understanding and respecting the science behind climate change
5 months ago
Some asthma inhalers as bad for environment as eating meat, says study
Next Page