The US president has said that he will sign an executive order stopping families being separated at US borders.

Donald Trump has said he will end the policy that has seen over 2,300 children being taken from their parents in the past number of weeks by border officials.

He said that he remains committed to policing migration into the country. 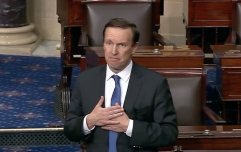 END_OF_DOCUMENT_TOKEN_TO_BE_REPLACED

"We’re looking to keep families together," he told journalists this afternoon.

"Very important. We’re going to be signing an executive order.

"We’re going to keep families together but we still have to maintain toughness or our country will be overrun by people, by crime, by all of the things that we don’t stand for and that we don’t want.

"So I’m going to be signing an executive order in a little while before I go to Minnesota but, at the same time, I think you have to understand, we’re keeping families together but we have to keep our borders strong. We will be overrun with crime and with people that should not be in our country.”

The president was criticised by the United Nations, foreign leaders and both Republicans and Democrats for the treatment of migrants at the country's borders.

A zero-tolerance policy on illegal immigration was announced in early May.

popular
Man arrested following bloody fight at Dublin Airport
Powerful moment lawmaker gets emotional on Senate floor over Texas school shooting
Tributes pour in after Love/Hate actor Stephen Clinch dies aged 52
21 dead, including 19 children, following school shooting in Texas
Galway named one of the top 10 best European cities to raise a family
26 big movies have just been added to Amazon Prime Video
Irish employment law experts warn employers must find ways for staff to take entitled leave
You may also like
1 day ago
People with many sexual partners need to watch out for monkeypox, says chief UK doctor
3 days ago
Morgan Freeman has been banned from entering Russia
4 days ago
Tax energy companies' profits to help with cost of living crisis, says think-tank
5 days ago
Amber Heard's acting coach explains why she believes her tears are real
5 days ago
Elon Musk accused of sexual misconduct involving flight attendant on private jet
5 days ago
The world's most expensive car has sold at auction
Next Page