The last time Donald Trump arrived on Irish soil, he was greeted on the runway by a red carpet, a harpist, a fiddler, a Minister for Finance and a raven-haired cailín in a blood-red dress.

It was a suitably garish welcome for a man who, at the time, was best known for owning tacky casinos and hotels, and whose political involvement was limited to false accusations about then-President Barack Obama and his birthplace.

Today, Trump finally made his return. This time, he is the president. No red carpet, just a black SUV.

An American President in Ireland has long been cause for huge celebration. When Obama came to visit his ancestral home, the streets of Dublin were jammed from wall to wall to hear him speak. There's now a statue of him and Michelle in Moneygall. A visit of Bill Clinton to Derry was recently immortalised in an episode of Derry Girls. There are honest-to-God shrines to John F. Kennedy throughout Wexford (and beyond).

But Trump’s visit has been carried off in a very uncharacteristic fashion. Quietly. Discreet, even.

So why is a man who called the Mayor of London "a stone cold loser" before he even arrived at Stansted just days ago so uninterested in causing the same noise here as he does everywhere else?

Donald Trump is not a man who traffics in sentiment — especially not wistfulness for ancestral homes, Arran jumpers and a pot of stew by a turf fire. To elevate Ireland to that mythical motherland status, as so many former Presidents and tourists alike, would only undermine his unshakeable America First approach.

Ireland’s relationship with America can be defined by only one thing, and that is a gushing flow of immigration from here to there, in the millions. Sometimes legally, sometimes not. Some became criminals, some became presidents. All were, and are, utterly unashamed. 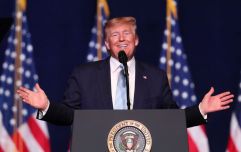 END_OF_DOCUMENT_TOKEN_TO_BE_REPLACED

For Donald Trump to acknowledge Ireland’s role in shaping modern America would go against everything he stands for. It would erase every one of his preposterous, bad-faith arguments for why Mexicans and Muslims should be kept out by means necessary.

This is a man who won't acknowledge that America is a nation of immigrants. So he'd rather be anywhere than here: the nation of emigrants.

God almighty, the Trump protests aren't even about Trump. The peace camp outside Shannon Airport is led by groups like Shannonwatch, who have been demanding that Shannon no longer be used as a stopping point for the US military since 2001, back when Trump was still a twinkle in Roger Ailes' eye.

MEP-to-be Clare Daly, who was present at Wednesday's demonstration, noted: "It's a little bit ironic to see some people speaking out about Donald Trump, who is obviously a disgusting, ignorant and brutish and rude individual, but the same people were utterly silent when Barack Obama came here and were silent about George Bush's policies."

Sure, these people hate Donald Trump, but they hate US imperialism more. About three Trump supporters showed up in a counter-demonstration and were later joined by less than a dozen pro-lifers.

He can't even enjoy the traditional Guinness photo-op because he's a tee-totaler. There is nothing for Donald Trump here.

As of Wednesday evening, Trump has already conducted the entirety of his official business. A brief sitdown with Leo Varadkar. He reassured us that Brexit will be very good, that the border issue "will work out" (that's a relief) and that he is looking at getting us some more of those juicy, sweet E3 visas. So at least we know those bowls of shamrocks we give them every Paddy's Day aren't going unrewarded.

The Irish government is certainly making more noise about Trump's visit than is the man himself. Leo Varadkar's toadying tweet aside (can't you go five minutes, Leo?)... €10million and 2,000 Gardaí have been redirected towards Shannon, where Air Force One flew in, and Doonbeg, where the President will stay.

Indeed, people in Shannon are amazed by the Garda presence, and talk about how they've never seen so many Gardaí before. There are so many Garda vans and uniforms outside every local hotel that they've all started to look like Garda stations. Rumours abound about secret service agents and complex missile systems installed to deal with any threats to the president.

Trump will now turn his attention to his true purpose on Irish shores: inspecting the Trump International Golf Links & Hotel Doonbeg Ireland, where he's pushing for a very different kind of wall.

He won't be going anywhere near state business, he won't be visiting any landmarks or kissing any stones. He won't be pulling pints and he won't be singing trad songs. He'll be holed up on the 18 holes of his golf course.

That, at least, is classic Donald Trump.


popular
QUIZ: Do you know your dashboard warning signs?
The most popular baby names in Ireland in 2019 have been revealed
The line-up for this week's Late Late Show is here
Here are the 11 best movies on TV this Friday
The JOE Friday Pub Quiz: Week 179
The weather for the weekend looks very grim altogether thanks to Storm Jorge
QUIZ: What movie/TV show are these fictional sports teams from?
You may also like
5 days ago
Brendan Gleeson's upcoming performance as Donald Trump is 'scary' and 'too close for comfort'
1 week ago
Donald Trump takes aim at Parasite's Oscar win because the movie is from South Korea
3 weeks ago
Trump acquitted of both charges by Senate in impeachment trial
3 weeks ago
Nancy Pelosi rips up copy of Trump's State of the Union address as he finished his speech
3 weeks ago
US election: Results delayed in Iowa democratic vote due to "inconsistencies"
1 month ago
'He was sent to us' say evangelicals praising Trump at rally
Next Page