Keep your pets safe over this scary period.

The Dublin Society for Prevention of Cruelty to Animals (DSPCA) has offered advice on how to ensure your pets stay safe during what can be a difficult time for cats, dogs and other animals.

Speaking on Morning Ireland earlier this week, Gillian Bird of the DSPCA said that because of fireworks, pets can become "very scared" around this time of year. 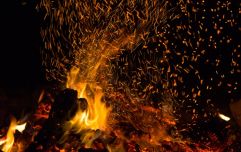 END_OF_DOCUMENT_TOKEN_TO_BE_REPLACED

Bird said that ensuring that your pets remain safe, comfortable, well-fed and warm are the most important things over the Halloween period.

She also said that dogs that aren't microchipped are particularly at risk, as the sound of fireworks could result in them running away.

She said: "We still have dogs and cats out there that are not microchipped, which means that if they do get lost - and they can easily slip their collars or just run off and get scared - it makes it very difficult for charities to reunite them with their owners."

She also said that back gardens should be extra "secure" during this time of year, so that pets can't escape in the event of them being startled by a loud bang.

Finally, she added that sweets should be kept out of reach of pets, though that applies year-round, really...

More info can be found on the DSPCA website.

popular
AIB to cut 1,500 jobs and close several Irish branches as part of cost-cutting measures
Sale of luxury castle in Kerry, described as "one of Ireland’s best kept secrets”, completed for €4.5 million
What the hell is 'Stomp and Holler', and why does Spotify insist that you love it?
Over 300 Ford cars recalled in Ireland over battery issue that could lead to vehicle fire
A new Krispy Kreme store is set to up in Dublin city centre
Pfizer/BioNTech Covid-19 vaccine to be rolled out in UK next week after government approval
Documentary on Fungie's disappearance and The Den Christmas special among highlights of RTÉ festive schedule
You may also like
1 month ago
Rare "blue moon" will be visible over Ireland on Halloween night
1 month ago
No trick or treat? No problem, thanks to MunchDiddly's, Ireland’s new online sweet delivery service
1 month ago
The JOE Movie Quiz: Week 75
1 month ago
The JOE Movie Quiz: Week 74
1 year ago
What your 2019 Halloween costume says about you
5 days ago
Reopening of restaurants and gastropubs, travel between counties set to be approved by government
Next Page