As Storm Callum reaches land, travelling will become much more treacherous in Ireland.

This has led Aer Lingus to pre-emptively cancel several flights scheduled to arrive or depart through Dublin Airport on Friday 12 October.

According to the Live Arrivals and Depatures page for Dublin Airport, cancelled flights early in the morning include certain flights from Amsterdam, Birmingham, London, Manchester, Paris, Brussels, and Berlin between 6am and 7am. Flights to Isle of Man and Isle of Man. 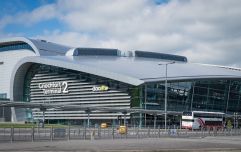 END_OF_DOCUMENT_TOKEN_TO_BE_REPLACED

As for Arrivals, flights to London, Kerry, Donegal, Manchester, Birmingham, Amsterdam, Paris and Brussels after 8am are affected.

To ascertain whether or not your flight is one of the ones that has been cancelled, check here for Arrivals and here for Departures.

A number of flights on our European network have been cancelled on Friday 12 October due to #StormCallum. Please check flight status before travelling to the airport.

As things stand, the timetables for Cork Airport and Shannon Airport have not been affected.

popular
WATCH: Storm Barra batters Irish coast in startling footage from lighthouse keeper in Cork
Ant & Dec call out Boris Johnson over Downing Street Christmas party
Amazon Prime Video has quietly added 8 big new movies to its library
Woman killed in Clare crash named as Peggy Twomey, mother of Marty Morrissey
These are the most generous counties in Ireland, according to GoFundMe
QUIZ: Name all the countries that contain 11 letters
One of the funniest comedies ever is among the movies on TV tonight
You may also like
3 months ago
Dublin Airport apologises for "lengthy queues" at security on Sunday morning
4 months ago
80% rise in taxi trips to Dublin Airport since international travel re-opened
5 months ago
All Aer Lingus regional flights operated by Stobart Air have been cancelled with immediate effect
11 months ago
Woman arrested as Gardaí seize 3kg of crystal meth at Dublin Airport
1 year ago
Three people arrested at Dublin Airport after ingesting 280 pellets of cocaine
1 year ago
Plane ticket to nowhere: Dublin Airport during lockdown
Next Page